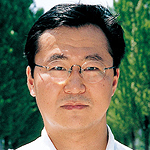 Title
Professor, Information Systems and Technology Director of the Center

School days' Dream
First PC was put on the market as my junior high school student, then I was very interested in it and would like to master it.

Motto
In the book of life, the answers are not in the back.

Messages for Students
Please get interested in many things.

Publications other than one's areas of specialization

The aim of this research project is to construct a wide-area sensor network that interprets users’ abstract sensing demands. The network then finds the sensors that hold the data which satisfies the demand, mashes up the collected data within the network along with useful information from other systems, and finally enables the user’s terminal to display it in real time. The sensor network itself has an environmental adaptability that allows each sensor node to consider its surroundings and the user-issued requests, and which will then dynamically change its role to actively acquire the desired sensing data autonomously.