Mr. Mianxiong Dong, a first - year student of the Master Program of the Graduate School of Computer Science and Engineering at UoA is now doing his 3-month research (from January 5 to March 31) at West Virginia University, USA on UoA's International Short -term Study Program for Academic Year 2006.
Here is a report on his research and daily life in U.S.A. 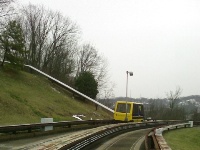 One month has passed since I came to Morgantown. Although it was a little bit hard for me in many cases at the beginning, now I have become acclimated and enjoying my daily life here. Morgantown is located in the northern part of West Virginia State, and its climate is slightly colder than Aizu Wakamatsu city, but we don't have snow like Aizu. Since the minus temperature continues for two weeks even in daytime, it is quite cold. However, heating works effectively at the inside of the university and my apartment, so wearing light clothes are enough. West Virginia University (WVU) has 26000 students and 171 majors. Because the campus is divided into three parts, students move between campuses by a pretty convenient vehicle named PRT (like a monorail). Of course, it is free.

Taking a class and going to the laboratory is my daily work. I attend Computer System Security for graduate students and Introduction to Open Source, Operating Systems Structures for senior students this semester. The class timetable is 75 minutes, 75 minutes for Tue, Thu and 50 minutes for Mon, Wed, and Fri respectively. Unlike Japan, a class is not done by following a certain format, but a class is completely done with free a style which means professor can chose any style he/she wants to teach in the class. There are some professors who give a lecture based on PPT files; some professors who do it ad-lib without any materials and someone who have no lectures which means the class is composed (presented) by students themselves. I feel a fresh feeling for this way very much. Now, I truly appreciate my university's undergraduate program. Because of the class experience in English for four years, I don't have trouble in understanding the contents of classes until now. However, to be honest, when American students talk extreme rapidly at the time of some discussions or debates, there is still a high hurdle for me to understand. To catch up this speed is the next goal for me in my rest stay. 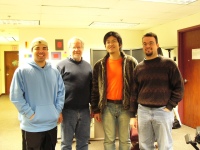 Well, now I want to have a brief introducing of my host laboratory member in the photograph. We have other members but unfortunately they were out for lunch. My right-hand side is Dr. Don who is my host professor and an expert of Japan. He has been in Japan several times. Now, he usually eats rice 2 or 3 times per week. He is so kind to me to make my stay comfortable. I sincerely would like to borrow this space to express my gratitude to him. The leftmost man, Mr. Nakaishi is actually a third generation Japanese-American. Maybe you cannot aware that at all from his appearance. He said he can only say "kon ni chi wa" in Japanese. And the cool guy in the right side is Mr. Alberto. He is very familiar with Fortran language.
Half time of my stay has gone. I am having a wonderful experience by meeting people, talking with them, feeling their culture. What can I do in the remaining period?? Nothing but enjoy my stay!