Mr. Jianguo Yu, Chinese research student at the University of Aizu was invited to speak by the "English Club" at Matsunaga Elementary School in Aizu Wakamatsu city on September 17th, and introduced "Old Chinese games" to the students of the English Club.

They were surprised at his presentation as some Chinese games such as skipping rope and Drop the Handkerchief are identical to Japanese games. Mr. Yu also told the students about dragon dancing performance and jumping between two Rubber Band Ropes and with complex steps which are not known in Japan. The students learned about both similarities and differences between China and Japan from his presentation with videos and pictures. CSIP office is planning to expand such activities in the future. 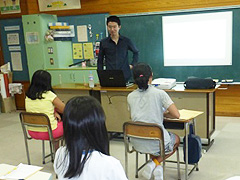 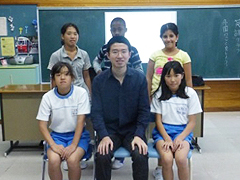