President of Posts and Telecommunications Institute of Technology (PTIT), Vietnam, visited the University of Aizu

President Hoang Minh and Assistant Professor Nguyen Ngoc San from PTIT visited the University of Aizu on Friday, March 20, 2009. They talked with President Tsunoyama, Vice President Mirenkov and Director Iwase. Assistant Professor Pham and Assistant Professor Hashida also participated. PTIT has been one of our international partner universities since the general exchange agreement was concluded in November, 2008 when the President's delegation visited PTIT in Vietnam.
President Tsunoyama and Director Iwase were delighted at this reunion with President Hoang in Aizu and welcomed their visit to Aizu even though they had a tight schedule in Japan. They exchanged opinions regarding future exchange. Vice President Mirenkov also introduced research and education at Aizu.
President Hoang had a tour in our campus. They visited Computer Exercise Rooms and Anechoic Chamber. Associate Professor Vazhenin demonstrated of orchestra performance played by a lot of computers. They had a strong impression on our outstanding research and education. 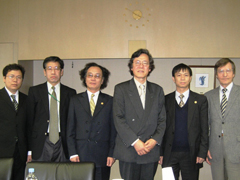 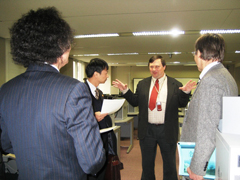 Tour in our campus