Report on the Fifteenth International Talk

The Fifteenth International Talk was jointly held by SAISIA and CSIP on Tuesday, February 19, 2013 at the Research Quadrangles. The speaker at the 15th talk, titled "Russia: the Land of Opportunity, Contrast and Free Wi-Fi", was Mr. Arkady Zgonnikov, a 2nd-year student of the Ph.D program of the University. About 23 people including international and Japanese students, faculty and administrative staff members of the University attended in the occasion of the talk about Russia that is one of the booming countries in the current world economy. He touched upon the long history of his country compactly and in a comprehensible way. Then he explained about the current Russian economy especially in the fields of science and IT. He also referred that Russia is "between the West and the East". In answering questions after the talk, he mentioned that he was a bit surprised to know Russia and Japan are still under negotiation of the Treaty of Peace. 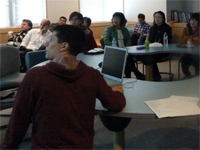 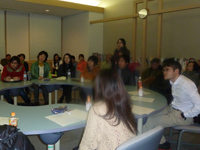