Report on the Fourteenth International Talk

The Fourteenth International Talk was jointly held by SAISIA and CSIP on Tuesday, December 13, 2011 at the Research Quadrangles. The speaker at the 14th talk, titled "One way ticket from Japan to Japan", was Mr. Nobuhiro Aita, a 3rd-year student of the University. Mr. Aita challenged an around-the-world trip and returned to Japan in September, 2011, after successfully finishing his trip through 45 countries for almost two years. His vagabond-style trip started from Shanghai. In India, his bicycle was stolen, and he suffered from high-altitude illness while climbing up Mt. Everest in Nepal. He had lots of great encounters and valuable experiences everywhere he visited. His journey continued from Asia through Europe and Middle East to Africa. After traveling down to the Cape of Good Hope, he flew to South America and headed to North America. He drove across the U.S.A. from coast to coast with friends he met in the States, and flew back to Japan from San Francisco. His adventure finally came to an end after one year and ten months. During the trip, with the news of the Great East Japan Earthquake and tsunami disaster on March 11, he considered coming back to Japan, but decided to continue his trip as he was able to confirm the safety of his family and house in Miyagi Prefecture, one of the disaster-struck areas. More than 30 people who attended the talk, including students, faculty and administrative staff members of the University, very much enjoyed his talk on many fascinating experiences. Mr. Aita was asked a number of questions during and even after the talk. 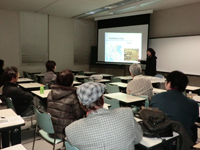 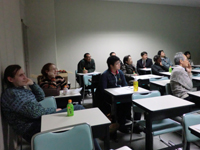