SAISUA and CSIP jointly organized Thirteenth International Talk on Feb. 7 (Mon), 2011 from 18:10 to 20:00 at the Research Quadrangles. The speaker of the talk was Dr. Marcin Paprzycki from the Polish Academy of Science with a title "Poland: Everything that you ever wanted to know, but were afraid to ask". He is a Visiting Researcher for 3 months at the University of Aizu from Poland. In his talk, he described about his country from various aspects such as history, culture and cuisine. He touched upon that there was almost no brain drain from Poland after the disintegration of the Soviet Union while Russia suffered from it very much. A total of 20 people including students, faculty and staff members on campus attended the talk. During the talk, a lot of questions were raised, and it resulted in extending the session for more than 30 minutes. The participants all enjoyed active exchange of opinions. 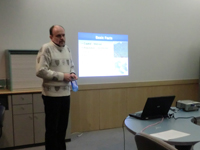 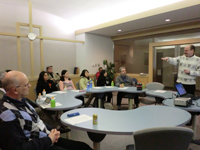