SAISUA and CSIP jointly organized Eleventh and Twelfth International Talks on June 7 (Mon) and on June 14 (Mon), 2010 respectively from 18:10 to 19:10 at the Research Quadrangles. The speaker of the 11th talk "Introducing Tanzania: the Land of Kilimanjaro and Zanzibar" was Ms. Saphina L. Mchome, a master student entered in October 2008, who is the first student from Tanzania to the University of Aizu. In her talk on her country which consists of 120 tribes, she described it from various aspects such as natural landscape, politics, industry, education and cuisine. There were more than 40 people including students, faculty and staff members on campus attended the talk, and the venue had to be changed to a larger lecture room. After one week from the 11th talk, the 12th talk was held at the lounge of the Research Quadrangles. Taking the opportunity of her visit to our university, we welcomed Dr. Marcia Johnson from Waikato University to deliver a talk about New Zealand and her university. She briefed about New Zealand and then explained in detail regarding Waikato University with plenty of reference materials. There were 28 participants including students, faculty and staff members. During each talk, many qustions were asked and answered. The participants all enjoyed active exchange of opinions. 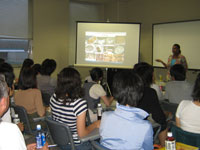 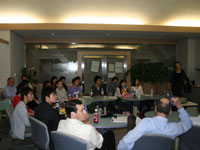 Scene from the Eleventh Talk (left), and the Twelfth (right)