SAISUA and CSIP jointly organized Seventh International Talk on December 18 (Thurs), 2008 from 18:00 to 19:30 at the Lounge of Research Quadrangles. There were total 14 participants with a breakdown of 7 university students and 7 from university faculty and staff members. The speaker was Mr. Norbert Gyorbiro, Ph.D student, with a title of "Hungary, where Martians come from." He is a first student from Hungary to the University of Aizu. He introduced his country including the history, language, economy, education, culture and so on. At the last part of the talk, he gave some quizzes about famous scientists of Hungary and gave Hungarian coins to the winners as a prize. One of the famous scientists of Hungary would be Dr. John Von Neumann who is called as one of the fathers in computer and wrote a well-known book titled "Theory of Games and Economic Behavior." Other Hungarian scientists are Dr. Rubik Erno who invented Rubik's Cube, Dr. Peter Frankl who is a mathematician and also a street performer, etc. During the talk, many qustions were raised and an active exchange session was held.

(Excerpts from comments of the participants) 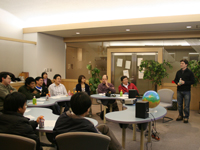 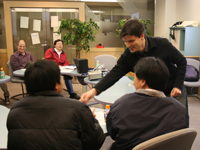