SAISUA and CSIP jointly organized Sixth the "International Talk" on July 17 (Thur), 2008 from 18:00 to 19:30 at the Lounge of Research Quadrangle. There were total 15 participants with a breakdown of 9 university students and 6 from university faculty and staff members. There were two topics for the 6th talk. The first speaker was Mr. Rasika Ranaweera, student of the Master's program, titled "Sri Lanka, The Emerald Island". He entered the University of Aizu this April from Sri Lanka. He introduced his country including its history, language, economy, education, culture among other things. He also introduced a famous Sri Lankan song and served Ceylon tea with cashew nuts to the attendees, that created a friendly and relaxed atmosphere for the talk. The second topic was a study report by Ms. Yuka Sato, student of the Master's program. She went to the University of South Carolina (USC) for three months from January 5 to March 31, 2008 under a short-term study abroad program held by the University. She reported on the classes she attended and her research theme that started at USC. After school hours, she joined the "Nihon Club" and enjoyed private time with friends. After each talk, an active Q&A session was held with many questions.

(Excerpts from comments of the participants) 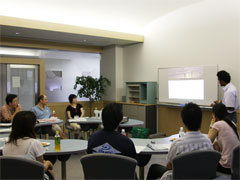 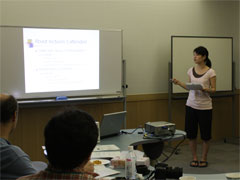