SAISUA and CSIP jointly organized Fifth International Talk on June 5 (Thur), 2008 from 18:00 to 20:00 at the Lecture Room 8 of Research Quadrangle. There were total 31 participants with a breakdown of 22 university students and 9 from university faculty and staff members. First speaker was Mr. Shin Hasegawa, doctoral student. He went to Stanford University in USA for three months from January 4 to March 31, 2008 under a short-term study program in abroad by the university. He stayed at a motel for 2 months and at an apartment for 1 month and commuted by bicycle. During his stay there, he had a chance to attend an international conference in Anaheim, CA, which inspired his research activities very much. Secondly two students who attended the study program at Rose-Hulman Institute of Technology (RHIT), reported their stay for 18 days in March, 2008. Mr. Junichi Fujinuma, sophomore student, explained in detail about the time schedule of RHIT and the courses he took. Mr. Fumio Nakajima, senior student, briefly reported about the courses he took and some private life there avoiding a duplication. They were very impressed by the students of RHIT that study hard and play eagerly. After each talk, an active Q&A session was held with many questions. They gave some valuable advices how to fill out an application of the program. Their talks were very rewarding and helpful for the students who are interested in a short-term study program in abroad. At last, Visiting Researcher Prof. Abdel Ejnioui had a brief introduction of his University of South Florida.

(Extracts from comments of the participants) 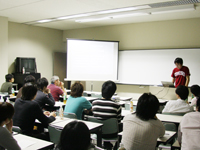