Mr. Kyohei Shiozawa, a third year student of the University of Aizu, has started his three-month research from November 26, 2011 to February 27, 2012 at Rose-Hulman Institute of Technology in Indiana, USA on UoA's Mid-term Overseas Study Programs for Academic Year 2011.
Here is his report on his research and daily life in USA.

A regular report from Rose-Hulman Institute of Technology (January, 2012)

A month and a half has passed since I arrived at Rose-Hulman Institute of Technology. I was sick and had a fever when I got to JFK, but I finally could relax when I arrived at Indianapolis International Airport. 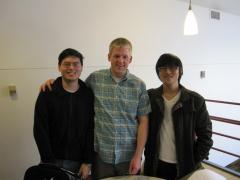 The first month at RHIT was hard for me. Of course, including English communication of daily life, I felt frustrated because the class as were was difficult to understand. I had planned to audit both Software Design and Computer Security but I dropped Computer Security because I didn't have enough knowledge to follow the class. The content of Software Design is that each team precedes a software project. In the class, I learned about diagram. Students repeat to write some diagrams and code programs. I joined a team and observed how the team accomplished the project. I had not experienced working in a big software project, so I could not digest perfectly. From seeing their work, I could tell it is true that Rose-Hulman students are bright. I also joined Japanese classes and helped with homework. Sometimes, I introduced Japanese culture with presentations. 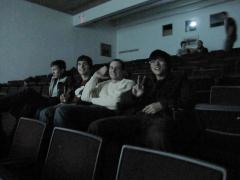 I stayed with two guys during winter break. On Christmas day I went to a church and sang with many people. I greeted and shook hands with them. After that, I participated in a Christmas party in Indianapolis. I felt that the party was different from Japanese one since I had not experienced a genuine Christmas party. December 30th was ski day but I didn't expect. My friend took me to Devil's Head Resort in Wisconsin. I hadn't skied since I was in junior high school. It took time to get used to skiing, but I enjoyed it. On the next day, the last day of 2011, I went to a Cage the Elephant concert with my friends. It was especially impressive when New Year's Day came. The band started to play again, and I was so excited I was jumping. Then, a guy I don't know came into between me and my friend, and he said "Happy New Year". We started to jump together. That is the best memory of my winter break. I became a fan of Cage the Elephant because of it.

The rest of my stay in USA became less than two months. I don't have much experience of staying here yet, so I don't know US culture and many things yet. I will try to learn as much as possible until this program ends.