Four students of University of Aizu (UoA) had finished their three-weeks short-term Oversea Programs from March 6 through 25 in 2011 at Rose-Hulman Institute of Technology in Indiana, USA on UoA's short-term Overseas Study Programs for Academic year 2010.
Here are their reports their research and daily life in USA.


Reports of Study at Rose-Hulman Institute of Technology

Koji Hashima (a fourth-year student during the program)

Rose-Hulman Institute of Technology (RHIT) is located in the small town of Terre Haute, IN. It has about twice as many students as the University of Aizu. They have a large campus with green lawns and trees so it feels like you are in a forest. There are a variety of sports facilities in the "Sports and Recreation Center". There are also some outdoor playing fields. In addition, most students live in dormitories, and because of these, they spend a lot of time together.
In these surroundings, we enjoyed student life at RHIT from the beginning of the spring quarter. I took several classes related to, not only computer science, but also economics, civil engineering, and sociology. I found the classes appealing, especially the relationship between the professors and the students. The professors remember each student's name, make sure everyone understands what is being taught, and also ask students' opinions in class. The students always come to class prepared and keep up with homework to ask questions actively and share their opinions. They also sometimes swap jokes with each other, making the classroom enjoyable. The class space formed by the professor and students maintain a learning atmosphere with little sense of tension.

Ryosuke Kaji (a third-year student during the program) 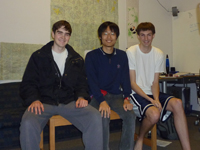 I took part in a short-term Oversea programs at RHIT in March 2011 to improve my empirical value by throwing myself into an English speaking environment.
English was my biggest challenge at RHIT. As I had taken several classes in English at the University of Aizu, I thought I could understand lectures at the RHIT. However, it turned out that I could barely follow the discussion by looking at handouts. Although it was difficult, I had some opportunities to express my opinion in class.
Another challenge I had was communicating with my three roommates. Although it was difficult to understand them. I thought I should not ask them to repeat. I often pretended that I understood them. But gradually I forced myself to ask them to repeat or ask them questions to understand them better. Then I started to feel confident to communicate with them. They were very concerned when the East Japan earthquake happened. I know the American people respect their family, but they are also considerate to us at such a difficult time.
I could improve my motivation to study English because it is necessary to live more productively. On holidays, I was guided in Indianapolis, went to restaurants. I felt differences between Japan and Indiana about town, people, foods and so on.
There were many challenges during my stay at RHIT. There will be more in the future. I'd like to study hard to overcome these challenges.

Suguru Takagi (a first-year student during the program) 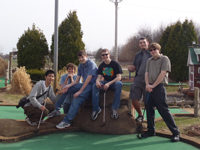 I could have an opportunity to study at Rose-Hulman Institute of Technology (RHIT) during spring vacation.
I will introduce the most interesting experience of university life. First, RHIT's classes were very practical. For example, RHIT's students wrote many codes to move a robot after they learned a new programming language for one week. Of course, as soon as they finished the code, they moved the robot with it. The class professors have close relationships with students because classes are small. They were proactive in communicating with the professor about programming. And it was very fun because they discussed the code with each other to improve it.
During studying abroad, I lived in a dormitory in RHIT. I couldn't communicate with many friends in English fluently, but I enjoyed conversation, playing games and eating meals together. I thought that "sharing a room" is very nice culture because students can communicate with each other anytime about anything.
These many experiences and meetings matured me a lot. For my remaining university life at the UoA, I will use these experiences to improve my studying and my global view. And, I will study abroad again in the future.

Hidenari Takahashi (a first-year student during the program) 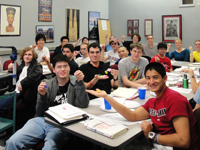 I participated in the study abroad program at Rose-Hulman Institute of Technology (RHIT) for 3 weeks. I had a lot of experiences with not only my major field but also differences in life style and our sense of values during the 3 weeks. I want to report about my major, computer science, but there already are a lot of reports about them. So instead I'll tell you about my personal experience and the charm of oversea study.
First, all of the people around me were very warm. In the classes neighboring students talked to me and in fast food restaurants clerks explained the taste of foods to me so I could have a great time. And after the big earth quake, students who I had never talked to before talked with me and asked about my family and friends so I could become composed. I thank all of the RHIT students and Americans I met. When they come to Aizu University, I want to talk to them and learn and play with them.
Second, it was good that I prepared and demonstrated some Japanese cultural things. I demonstrated Karate which I have studied for a long time, shared Japanese foods like Ginger Pork (fried pork with ginger and soy sauce) and Onigiri (Japanese rice ball), and folded Origami (making some creation from just one square paper.) RHIT has some Japanese language and media classes, so I asked the professors to demonstrate for the students in the classes. There are some students who know Ayatori and Shodo, so if you go abroad, I recommend you take some Japanese things. I was glad I could demonstrate Karate at the opening ceremony performance of RHIT Asian cultural festival and I was invited to several faculty members' homes after. I think they enjoy Japanese things we share with them.
Finally, I could work on my daily conversation skill in English. Especially, my listening skill was better than before. I think we can't stay abroad without the language so I had to get better. It is difficult for me to talk with others because I have to listen, to understand, and to speak so often I couldn't keep up with others.
I didn't earn credit because this program was a short-term training program, but I could have a lot of great experiences which can only be had by actually going there. I'll take advantage of these experiences to build my capacity, and I want to help the next oversea students take advantage of it with some points of advice.