Ms Yuka Sato, a second year student of the Master Program of the Graduate School of Computer Science and Engineering at UoA has finished her three-month research (from January 5 - March 29) at University of South Carolina, South Carolina, U.S.A. on UoA's International Short-term Study Program for Academic Year 2007.
Here are reports on her research and daily life in U.S.A.

After finishing her three-month research at University of South Carolina. 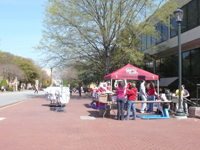 My study at University of South Carolina (USC) has already finished and, I am already backing in Aizu. Before I went to USC, I thought it would not be short. But after this program was finished, I really recognized it was too short for me. I wrote about the January's life in my previous report1, so I am going to write about February & March's life in this report.

It was getting warm only in the Daytime in February & March. It was still cold at night though. Dr.Paik from University of Aizu came to USC at the beginning of February. Then we walked around on the campus and met with Dr. Bacov who was my supervisor in USC. We talked about my research and I began the research about bioinformatics. It was new area for me to study and I took the bioinformatics class for the first time at USC. Though it took a long time to study it, I really enjoyed studying it. So I am going to keep studying it in Japan. 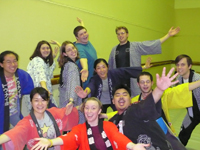 On the other hand, I went to "Japan Club." They have some Japanese activities, like eating "temaki-zushi" and watching Japanese movies. And we also had international festival in March so we performed "So-ran bushi" in the festival. Before international festival, we had practiced "So-ran bushi" everyday in the gym. It was very hard to dance for me but I really enjoyed dancing. While we were performing, though I was so nerves at first, our friends called out some phrases with us so I could enjoy our performance. We had a great time to perform "So-ran bushi". We also had a spring break at middle of March. I home-stayed at my friend's house and we went to Florida. It was my first time to go out from South Carolina. I could see a lot of "So American!" things during this trip, like big tracks, very wide roads, very cute American children and American snacks... I had a great experience.

I really would like to appreciate you, Ms. Honda, Mr. Ofuji, Ms. Nagashima, Ms. Takakura, Dr. Paik and Dr. Miyazaki from UoA, My family and friends in Japan, Dr. Buell, Dr. Huns, Dr. Bacov and Ms. Beverly from USC, My friends in S.C. gave me such a great and safe experience and always helped me! It's my turn to help my friends next time. Thank you so much!

About one month has passed since I arrived at Columbia city, South Carolina. The state of South Carolina is located in the Southern region of the United Sates. Columbia city is located in the middle part of South Carolina and it is the capital of the state. It gets downright chilly in the morning and night but it is usually warm during the daytime. But if we have rain, it is very cold during the daytime. I don't know if this is a common matter but there are some students who wear a short-sleeved shirt and short-pants drinking coke on a cold day. On the other hand, I wear a jacket, a scarf, a hat and gloves on the same day. They bring endless surprises to me. 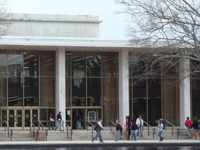 The campus is very large. If I walk from one end to the other, it takes about 1 hour. The students move between campuses by a shuttle bus. The shuttle bus comes every 20 minutes so it is very useful. However I was getting short of exercise nowadays because of the shuttle bus so I am trying to walk instead of taking the bus. At the first week after I arrived here, I was suffering from a jet lag and bloody nose, it was maybe because of the dry weather, but I got better in a week.

At the next week, students came back to the campus because the semester started. My schedule is that I attend classes, Digital logic design for undergraduate students and Bioinformatics for graduate students on Monday, Wednesday and Friday. On Tuesday and Thursday I study in the lab. In the class of undergraduate, the teacher teaches from the basics, and students are outspoken. When they have a question, they ask the teacher and clear up their question immediately. I felt it is different from Japanese one-way lesson. In the class of graduated, the teacher asks students to read the paper and text related the class by themselves. In addition, the teacher asks them to explain what they didn't learn in the class. It is difficult but I felt it is very exciting. 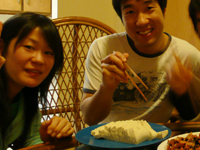 I made friends with many people in this university. I sometimes had dinner at my apartment with my friends who live in the same apartment. Another friend who loves Japanese anime and music lent me some English version of Japanese manga. He asked me to come to an anime club and I visited the club. There were about 50 people who love Japanese anime. I was surprised because they know a lot of anime which is relatively unknown in Japan.

One third of my stay has gone. I met a whole variety of people and had a wonderful experience in this month. I have 2 more months left so I want to enjoy my stay!