Mr. Shin Hasegawa, a second year student of the Doctor's Program of the Graduate School of Computer Science and Engineering at UoA has finished his three-month research (from January 4 - March 29) at Stanford University, California, U.S.A. on UoA's International Short-term Study Program for Academic Year 2007.
Here are reports on his research and daily life in U.S.A.

After finishing his three-month research at Stanford University 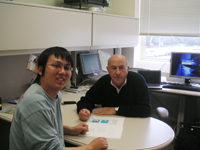 The grateful three months have gone. I felt them very short.
Professor Chris Constantinou who hosted me was very kind and took good care of me while I was at Stanford University.
During my stay, I audited four courses on Monday, Tuesday and Wednesday. On Thursday and Friday, I was at an office in a hospital that is called Veterans Affiliate Palo Alto Health Care System. Prof. Constantinou he gave me an office room in the hospital because he also works there. Since there was no place to access to the internet, I was not able to do research and thus, I normally did my homework there. Normally, I meet Prof. Constantinou or do my homework in the morning and eat lunch at VA, go to the Starbucks in California Ave, and study and do research on the internet.

Since I arrived in the United States, I had sought a room. However, I had been faced with difficulty finding one and I had to stay at a hotel for three weeks. After I came back from L.A. at the end of January, where a conference, "MMVR," was held, I finally found a room and moved in it. Working out many problems to find a room gave me confidence to find housing by myself in the United States. My roommate was a lady named Kelly. She was so kind. She often talked to me and made many chances for me to speak English. After I moved in the room, I cooked my dinner every night. Beef was very cheap in the United States. It only costs $2 per 1lb and thus, I ate great steak everyday.
On weekends, I went to the theater to watch some movies, to San Jose or San Francisco. I also visited the head quarters of famous companies in Silicon Valley. I just saw the buildings form outside because I could not enter the buildings.
Since the mid-February, it had been very clear and sunny days. I had worn short sleeved T-shirts because the sunshine was very strong and it was very hot. Since I went to Stanford campus or the office by bicycle, I had got a lot of sun-tan.

On the mid-February, Bill Gates gave the speech at Stanford University and I went to listen to it. When I told the story to Prof Constatinou by e-mail, he told me that my English writing skills were improved. I was really delighted. At the end of February, I went to Google campus and attended Hackathon which is a session of Google API. I also attended the Tech Talk of Microsoft Office Lab at Stanford. In the Talk, a video about their future vision was screened. It was very interesting. On March, I visited "Immersion" in San Jose. One of them showed his interest in my research and we are now discussing about future cooperative research.

Since February, I have wanted to make more chance to speak English and Prof. Constantinou introduced his students for me. We had lunch together and talk in English. Also, I had a chance to have coffee with a man who was a cashier at a supermarket which I went to while I stayed at the hotel. He told me he was a foreign student from Tonga at State Collage majoring Computer Science. He is also a stamp collector and gave me some old stamps as a token of our friendship. I also started to exchange e-mails with a man who asked me directions when I was boarding a bus. He told me that he works for Microsoft and came to Stanford to see his friend. He also told me that he has the same T-shirts that I was wearing at that time.

Since this program was only three-month, I had to go back to Japan when I just made some friends. However, I'm going to keep in touch with them. I felt three months very short but I had been through a lot of valuable experiences. For example, I took the courses for a whole quarter and took examinations for one of them. Also I would like to continue my research because I didn't finish my research. I learned not only English but also learned cultures by meeting the people at my apartment, the super market, a bar, and so on. I also had chances to look around the famous Information Technology companies in Silicon Vary.
I will do my best to be an international person with this experience. 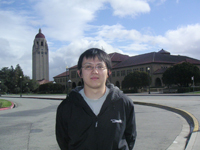 A month has gone since I came to Stanford University with a big storm. Usually, it is seldom rain here from what I've heard. On my arrival, however, it was a really big storm. It had been rain for a week since arriving here. After that, it was fine and rain in halves. Here is on higher latitude than Aizu-wakamatsu. However, it is not snow and temperature does not drop to under 0 degree. Thus, it is not so cold.
Professor Chris Constantinou who accepts me is very nice and a kind person. He is caring about me very much. 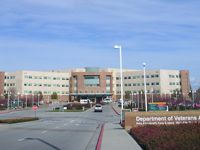 At the university, I audit 4 classes on Monday through Wednesday. And on Thursday and Friday, I go to VA Palo Alto Health Care System which is a nation hospital, and participate in Prof. Constantinou's research. He works not only at Stanford but also there. And he gave me an office there. Before he lent me a bike, it took me 40 minutes to get to Stanford University by walking. But after I got a bike, it takes 20 minutes. If I have time in the intervals between the classes or after the classes, I go to Starbucks with my laptop and access to the Internet drinking coffee. I think I really fit in here. I also have a lot of homework but I can learn really advanced technologies in the classes. So I really enjoy auditing them. The campus is very very large. It is hard to move a building to a building for each class. When the interval was only 10 minuets, I was not able to go to class on time. After I got a bicycle, I can make it on time. Also, free shuttle bus runs regularly in the campus. The bus can carry bicycle on front of it. I can ride on the bus with my bicycle and use bicycle after I get off. This is really good system and it is green.

Since V.A. is closed on Saturday and Sunday, I have free time. I try not to just stay at hotel alone, so I go out for sightseeing around here. The other day, I went to see original Google buildings by bicycle. I was just cycling around them though.
What I was surprised at Stanford is that they have a lunch seminar. Prof. Constatinou took me there. The presenter presents his novel research result. Meanwhile, we can have sandwich and coffee for free! Lunch meetings are also held often and the professor usually attends them.

Regarding the accommodation here, I booked a hotel for only two weeks. Meanwhile, I thought I could find a room to move. However, it was not going well. Eventually, I have stayed at the hotel for three weeks. I sent a lot of e-mails to the many objects on the housing website. Unfortunately, I have no reply. But the professor, his wife, his acquaintance and several persons are helping me look for a room. It is difficult to find a room for a short term staying. Instead, I was able to know housing information of the United States. Also in negotiating for housing, I used English in a positive way. It improved my reading and writing skills.

On the last week of January, the conference, MMVR, was held at L.A. The professor suggested to me I come with him, so I also attended the conference.

In next 2 month, I will make a lot of chances to have conversations with many persons, and I would like to learn many things.