Ms. Fumiko Ohori, a third-year student of the Department of Computer Software at the School of Computer Science and Engineering, has finished her 2-week research (from March 4 to March 18) at Rose-Hulman Institute of Technology, USA on UoA's International Short -Term Study Program for Academic Year 2006.
Here is a report on her research and daily life in RHIT

A report on RHIT, USA 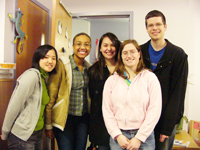 In March 2007, for half of a month I have been through a short-term study program in Rose-Hulman Institute of Technology (RHIT).
In RHIT, my school life was more interesting than that I expected. It was most rewarding for me. The temperature at RHIT was colder than that of Aizu. The weather was windy. So I put on several clothes. Remarkably the students of RHIT wore very light clothing, for example shirt with short sleeves. I felt that the influence of environment was great.

Out of class I learned a lot of things. To begin with, that was about eating. I had moved to the RHIT with having concerns about eating, but I could stuff my gut with delicious foods for every meal in the cafeteria served buffet style. I liked the best to eat pizza, and I ate that for every meal. Though you may think I was sated with the foods, the foods were so delicious and I was not sated with the foods. My weight becomes .....so so. My friends got me to go off-campus to eat sirloin. In addition, they got me to go a bowling alley, hiking, shopping and so many places. In an ordinary way I would not have done anything for two weeks. However in RHIT I could spend my precious two weeks.

Well, I talk about classes. For the first week, it took a lot of effort to listen and speak English, because I did not have enough ability to follow the classes conducted in English. Only consolation was that I did not face the difficult scene to recognize course content, because I took the same classes with U of Aizu for comparing. For the second week, I took other classes. On the listening front I could feel advancement of my ability. And now, I come back to U of Aizu. And I try to behave more positive attitude than before on a period of lecture, meeting, a question-and-answer, and debate. But it was difficult and impossible that I got communication ability of American style for a short time. If I get a chance to abroad again, I would take part in the chance.