VU Quang Minh is currently working toward a Ph.D. degree (D2) . Student Member, IEEE). His research interests focus on the design of Quantum Key Distribution systems for the security of next-generation mobile and wireless networks. Besides this newest achievement, Minh is also the recipient of several awards and recognitions, including the IEEE VTS Tokyo Chapter 2019 Student Paper Award in 2019 IEEE 89th Vehicular Technology Conference (VTC2019-Spring), the travel grant from NEC C&C Foundation in 2019, and the First Prize in 2017 National Students' Scientific Research Award held by Vietnam Ministry of Education and Training. His study at the University of Aizu is funded by the Japanese Government Scholarship (MonbuKagakusho).

HOANG Tuan Linh started his Ph.D. study in Oct. 2021 (D1) . His current research interests involve seeking data-driven solutions for mobile edge computing (MEC) network optimization in next-generation mobile networks. Linh received several awards, including the 2018 Honda Young Engineers and Scientists (Honda Y-E-S) and 2019 Honda Y-E-S Plus Awards from the Honda Foundation, and the Distinguished Student Award for Undergraduate Study by the Dean of School of Electronics and Telecommunications, Hanoi University of Science and Technology (HUST). His study at the University of Aizu is also funded by the Japanese Government Scholarship (MonbuKagakusho). 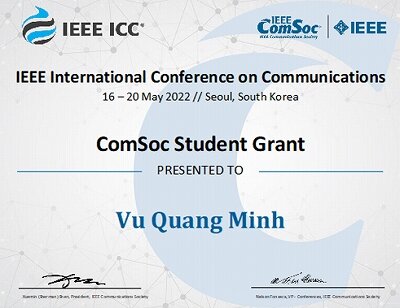 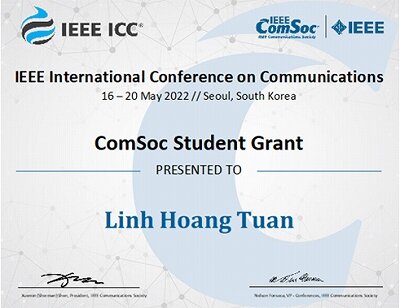 < Comment from VU Quang Minh>
"First of all, I would like to thank my supervisor, Prof. Anh T. Pham, for his conscientious guidance and support throughout my studies. It has been a great honor for me to have an accepted paper in ICC2022, which is one of two IEEE Communications Society's flagship conferences. Even more special, I have been awarded the IEEE COMSOC Student Travel Grants in ICC2022. I am extremely grateful and delighted with these achievements. They will encourage and inspire me on the way forward in my study and research."

< Comment from HOANG Tuan Linh>
"I feel highly delighted and honored to be awarded the IEEE ComSoc Student Travel Grant in ICC 2022. Having a paper accepted in one of the two flagship conferences of the IEEE ComSoc motivates me a lot to keep going forward in the research path I have selected. I would like to express my deep gratitude to my supervisor, Professor Anh T. Pham, for his continuous support and guidance throughout my research."

<IEEE Communications Society（IEEE COMSOC）>
Founded in 1952 as the Institute of Radio Engineers (IRE) Professional Group on Communication Systems (PGCS), today's IEEE Communications Society (IEEE COMSOC) has evolved to include a diverse group of global industry professionals dedicated to advancing all communication technologies and the improvement of the world around them. An independent Society of Institute of Electrical and Electronics Engineers (IEEE) (※4) since 1972, IEEE COMSOC has 200+ Chapters in 142 countries and over 24,000 members around the world in communications technology and information networking.

<IEEE ICC>
IEEE ICC is one of two IEEE Communications Society's flagship conferences (ICC and Globecom). Each year, close to 2,000 attendees from over 70 countries attend IEEE ICC to take advantage of a program which consists of exciting keynote session, robust technical paper sessions, innovative tutorials and workshops, and engaging industry sessions. This 5-day event is known for bringing together audiences from both industry and academia to learn about the latest research and innovations in communications and networking technology, share ideas and best practices, and collaborate on future projects.