From Aizu to the World, to the Universe

> UoA Stories > From Aizu to the World, to the Universe

The Birth of CAIST and Its Objectives

"The University of Aizu Research Center for Advanced Information Science and Technology, or CAIST, was established on April 1, 2009, thirteen years ago," says UoA Vice President and Professor ZHAO Qiangfu. ZHAO, who has a PhD in Engineering, describes the goals of CAIST as the following;

"With these goals in mind, we have spent more than a decade on a variety of research projects within CAIST, and developed a new research cluster concept," says Professor ZHAO. 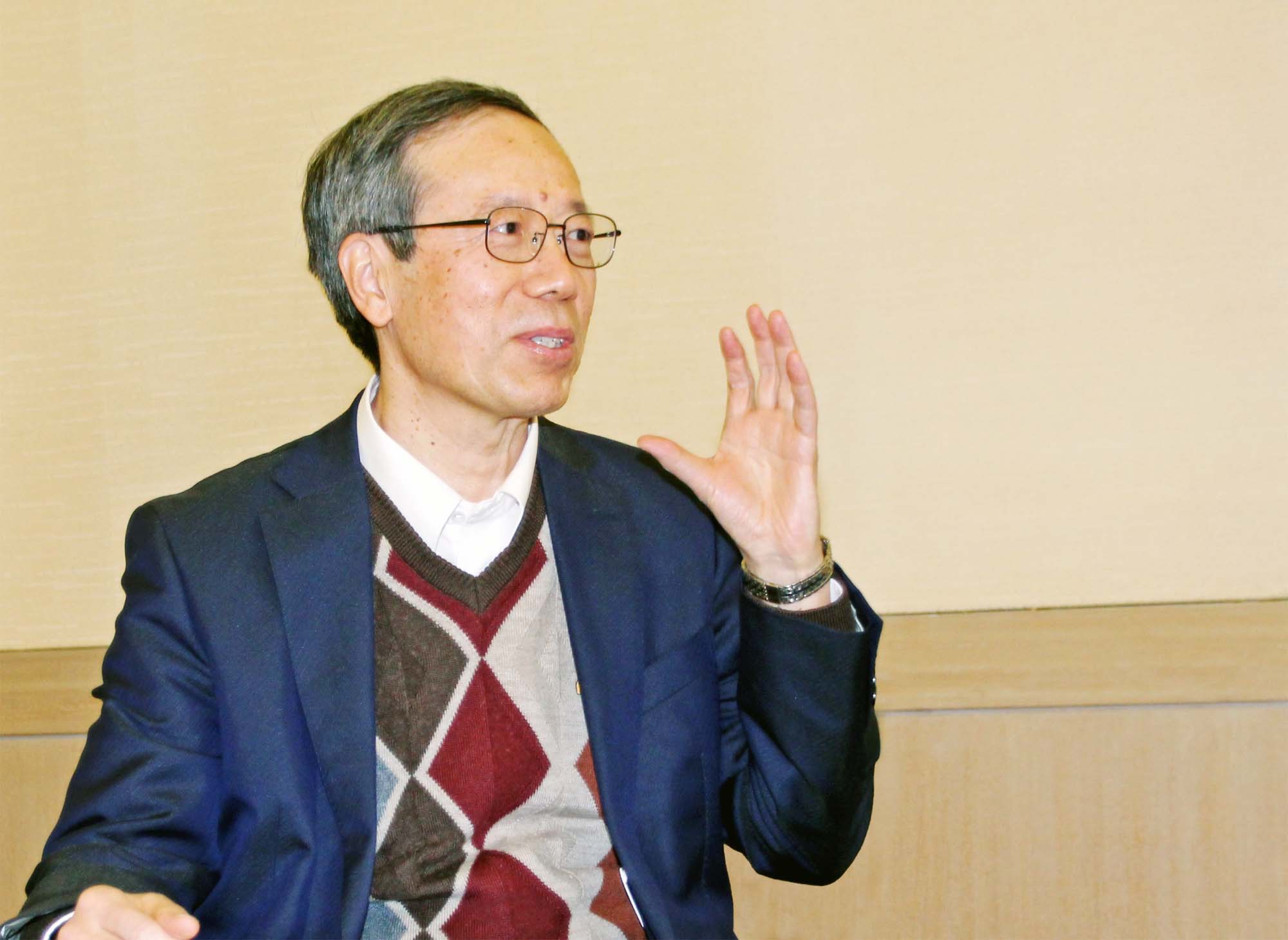 The word primarily means "group," "aggregation," or "agglomeration in various fields while amid the COVID-19 pandemic media reports have been using "cluster" in the meaning of "mass infection." To be specific, we asked Professor ZHAO to tell us about the UoA research clusters, and what kind of initiatives the Research Cluster model mentioned in the title of this article refers to.

From "Ten Chi Jin" to the Research Cluster Model 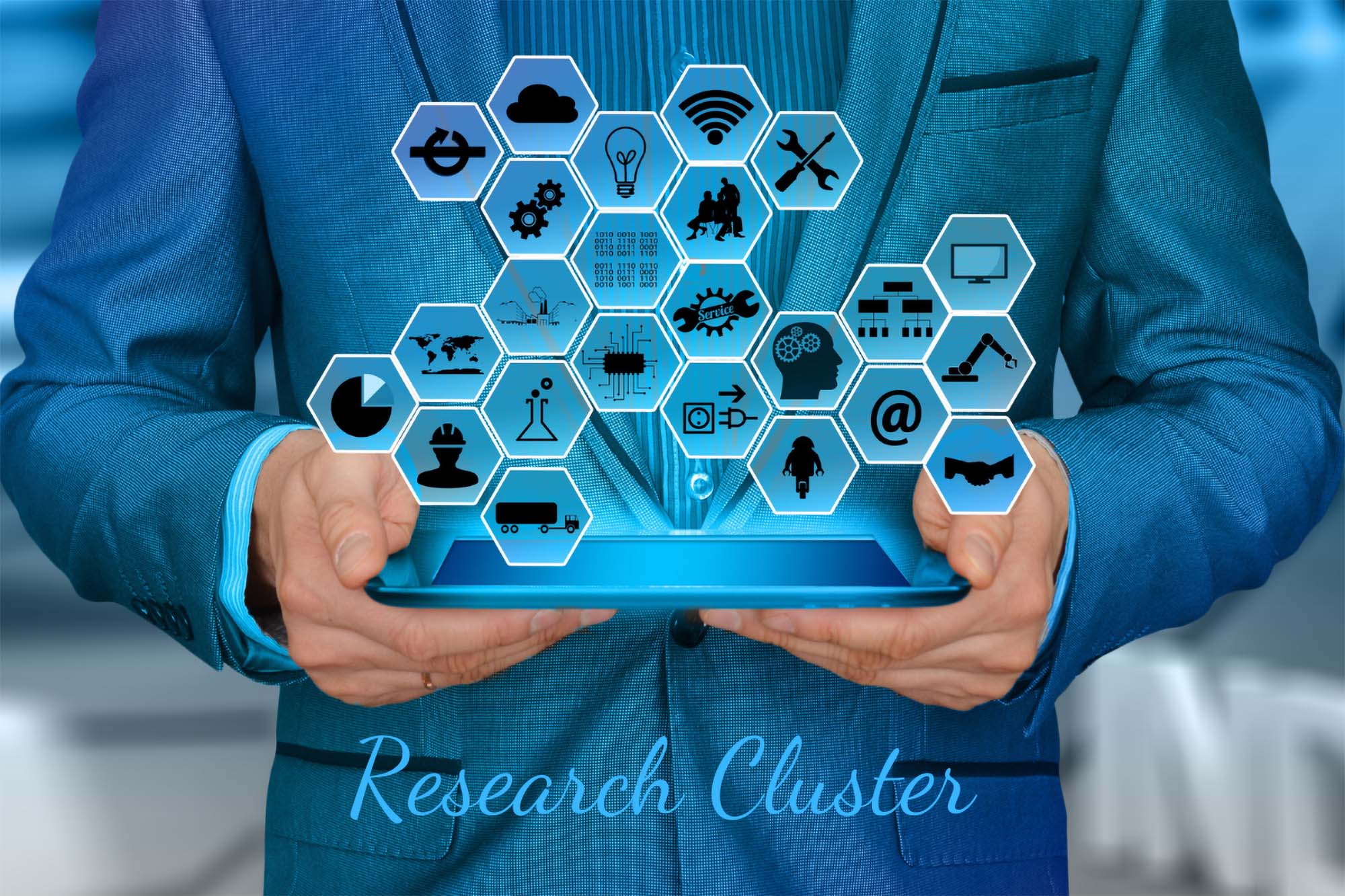 "The University of Aizu originally had three research clusters, which were referred to as 'Ten Chi Jin,' meaning 'Ten 'space exploration, "Earth" as meteorology, and "Human" as medicine. CAIST was established in April 2009 from three previous clusters; In order to further enhance our research abilities and stimulate research in a wider variety of fields, the Research Cluster model for organizing university-wide research teams - was established in October 2020," says Professor ZHAO. The Research Cluster model has been used in the sense that faculty members from various fields mutually further their research for creating new collective body, which will be divided into three major phases. The first tier consists of the six Basic Clusters, or B Clusters, which are made up of up-and-coming research teams. The second tier, which sits above B Clusters, are the three CAIST Clusters, or A Clusters. The highest tier of the Research Cluster model is the two Research Centers. Each of these Research Clusters sets its own research issues and works to develop solutions to them.

Building the UoA's with Mutual Collaboration Between Research Clusters 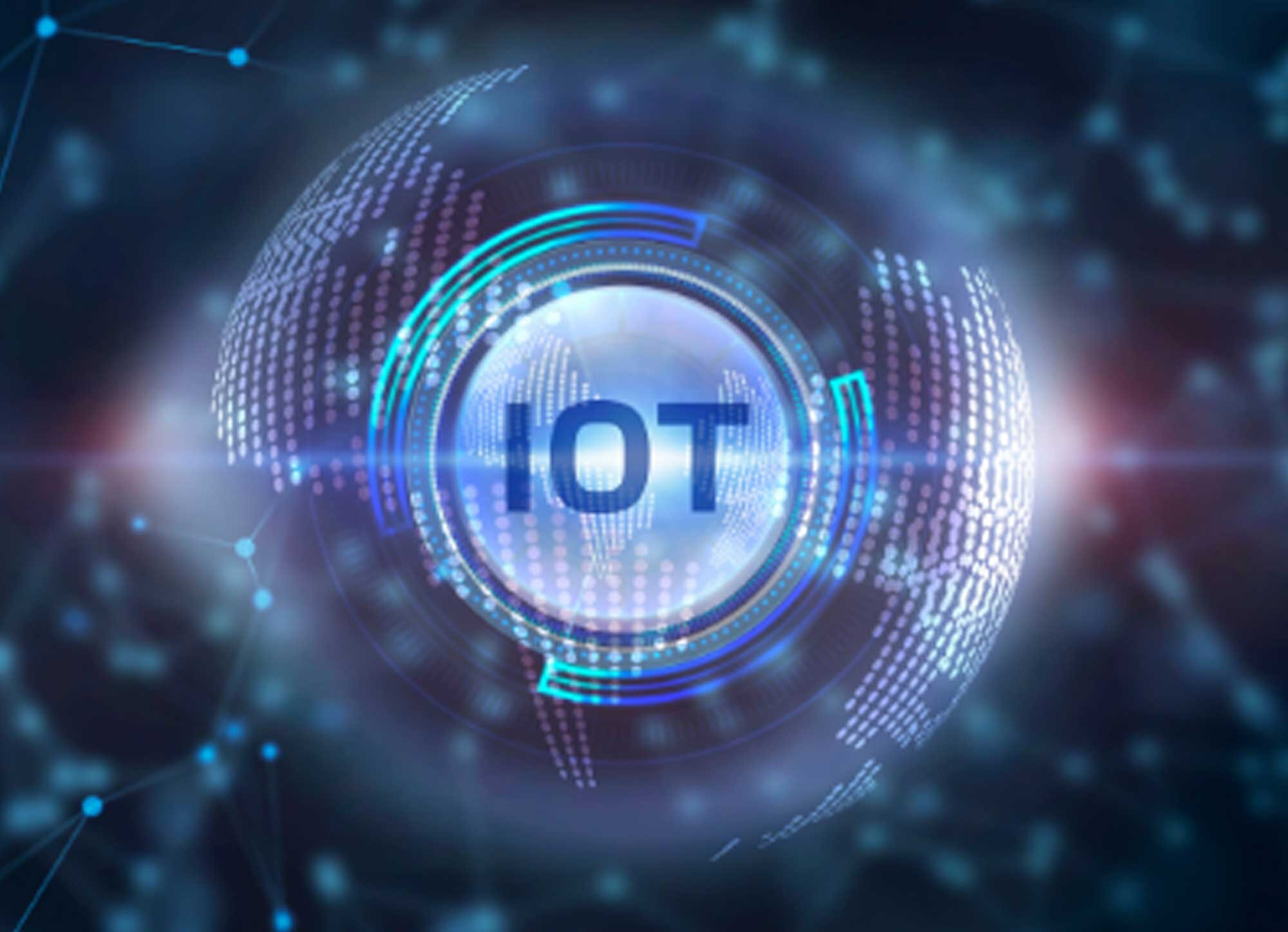 According to Professor ZHAO, "the UoA hopes to contribute to society by building its current Research Cluster model - which consists of Research Centers, A Clusters, and B Clusters - and continuing to further strengthen its research capabilities. We will increase the variety of our research and create cutting-edge clusters that can respond to social changes. As illustrated by PM KISHIDA's assertion that 'research is the foundation of a nation,' the Government of Japan has positioned research project on AI and data science as a way to enhance national prestige in the world. The University of Aizu, too, aims to become a top-class research institution by creating new solution through combining researches in order to become a highly attractive university.
Trends in the world are constantly, rapidly, and drastically changing, and it's not unusual for a problem that has a solution one day to need a different solution the next day. With an eye on the rapidly changing world of today, the UoA will focus on what we can do, what only we can do, and what others cannot do. We will disseminate our cutting-edge research in information science from Aizu to the world, gather many research collaborators from around the world, build clusters that create unknown value, and be a one-stop shop for deriving solutions to problems. Expectations for the future evolution of the "Research Cluster model" are certain to continue to increase in the future.

Here, we will present some specific examples of cluster activities. The IoT Cluster (ARC-IoT), has been engaged in research on the development of AI-equipped devices since it was established a little more than a year ago. IoT, which is short for Internet of Things, describes the network of physical objects, is a system that allows all kinds of information in the world to communicate via the Internet in order to create an action with interactive data. We are diligently conducting research on getting the most of the applications of IoT to devices such as smartphones and tablets.
Professor SAITO Hiroshi, one of the members of the ARC-IoT, is researching not only compact and energy-efficient IoT device hardware, but also the software that runs them.
"For example, batteries are necessary when using sensors to measure gas usage, checking availability of parking spaces, etc. outdoors where there is no electricity. One of our goals is developing miniaturized, energy-efficient, and weatherproof IoT devices in order to prolong the life of these batteries as much possible," says Professor SAITO. 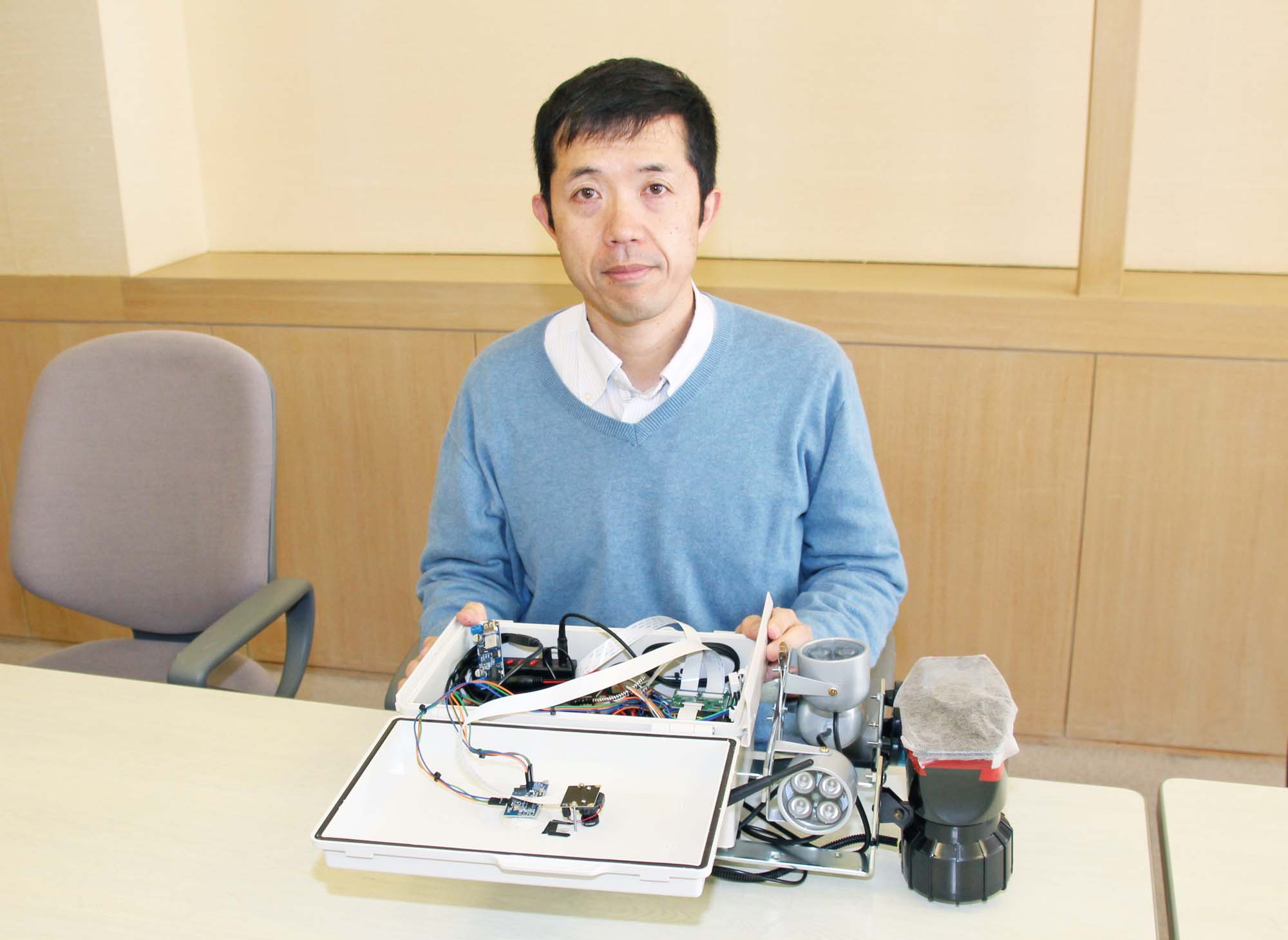 Research and development of an AI-based wildlife detection system

Recently, the mainstream of development is smarter IoT devices such as those can process images from cameras embedded on IoT devices by using AI. Professor SAITO, too, has been researching the configuration and design of smart IoT devices that fully incorporate AI. As an application of this research, Professor SAITO has begun working on the development of a wildlife detection system.
"We have been working on this effort for four years. At the time, there had been reports of bears appearing in downtown Aizuwakamatsu City. As a hardware development researcher, I thought that we could detect bears by using AI to quickly disseminate information on their detection and prevent damages. However, university research tends to be about methodology rather than practical implementation, I don't have that much experience building things that actually work, like the detector in this case. " Professor SAITO had little experience with AI, either. While Professor SAITO and his team were able to detect test images using an open-source AI model, they were unable to detect objects in outdoor field trials. So, Professor SAITO and his team finally succeeded in detecting bears in July 2021 after building countless iterations of their own AI program.
"The AI model needs to 'learn' to extract the characteristics of bears from images of them. Unless the model learns from the images obtained in the field trials rather than those just downloaded from the Internet, the AI model will not be able to successfully detect bears in the field trials."

Afterwards, the development of an automatic bear detection system began in earnest as a project commissioned by the Aizu Regional Promotion Bureau of Fukushima Prefecture. "As soon as the accuracy of automatic bear detection began to improve, we were asked if we could scare bears away." In fact, it was confirmed that bears could be scared away using light and sound, but they would reappear after a few weeks. "Experts say that if you don't give bears an aversive stimulus, they will appear again and again. However, our current AI may misidentify things as bears, since it recognizes black objects as bears, so it will be a little while before we are able to chase bears away by inflicting pain. We believe that training the device with more images is the key to solving the problem," says Professor SAITO. As part of field trial of this bear detection system, four students from ARC-IoT have been involved in the system's maintenance, including collecting images and solving equipment malfunctions in the field (Aizu Misato Town and Kitakata City). In FY2021, these students collected still images from the nine units once every two weeks. According to Saito, "In the beginning, it took more than an hour to retrieve the 10,000 to 20,000 images. It was quite unpleasant during cold periods, such as early spring. In order to tackle these challenges, a graduate student took the initiative to modify the image retrieval program, and now it takes only about 10 minutes to retrieve the images. I was also very encouraged by the student's efforts to improve the devices to detect bears in multiple directions, rather than just those in the front of the devices, while also reducing their size." 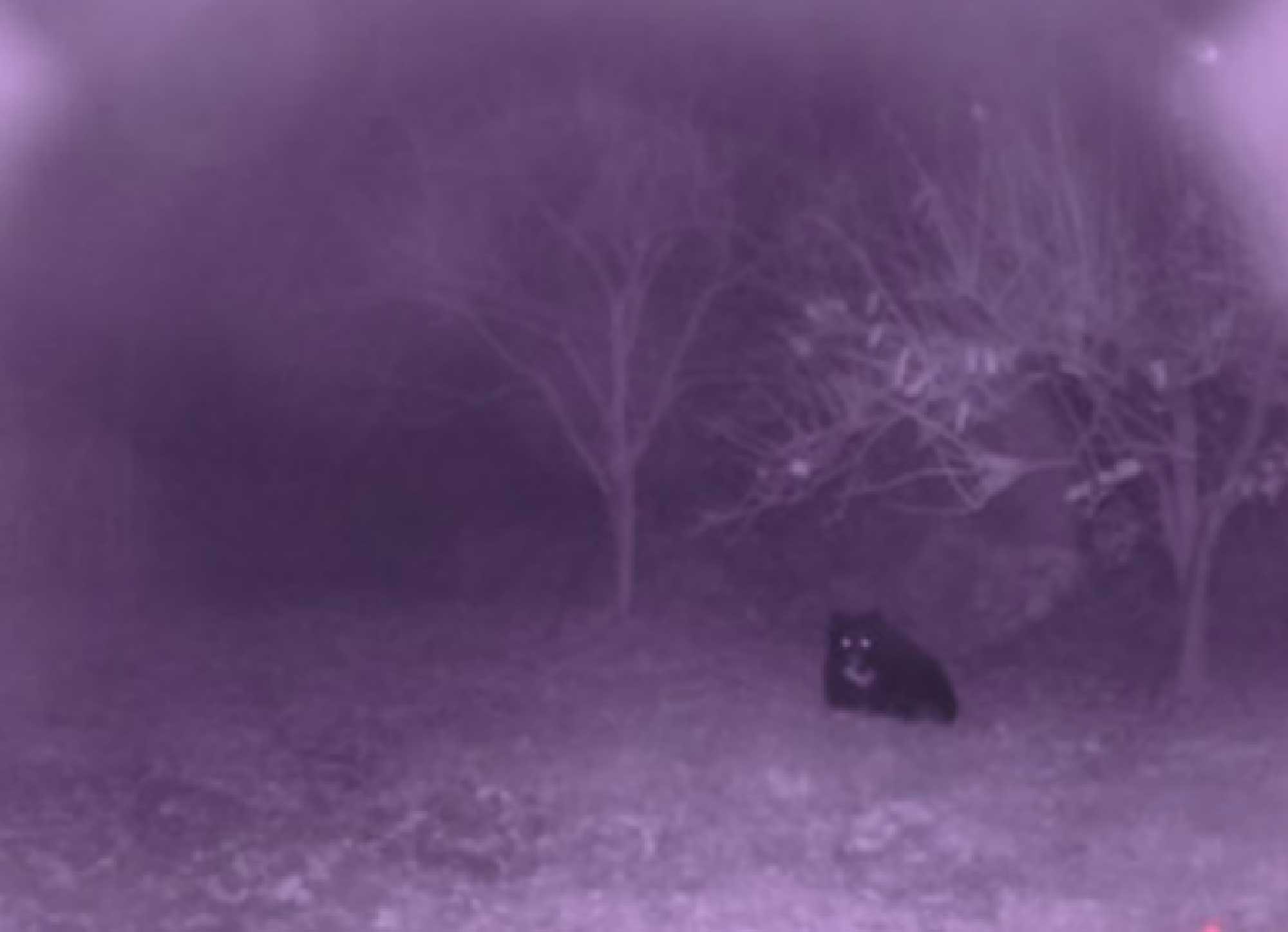 Image of a black bear captured by a wildlife detection system. 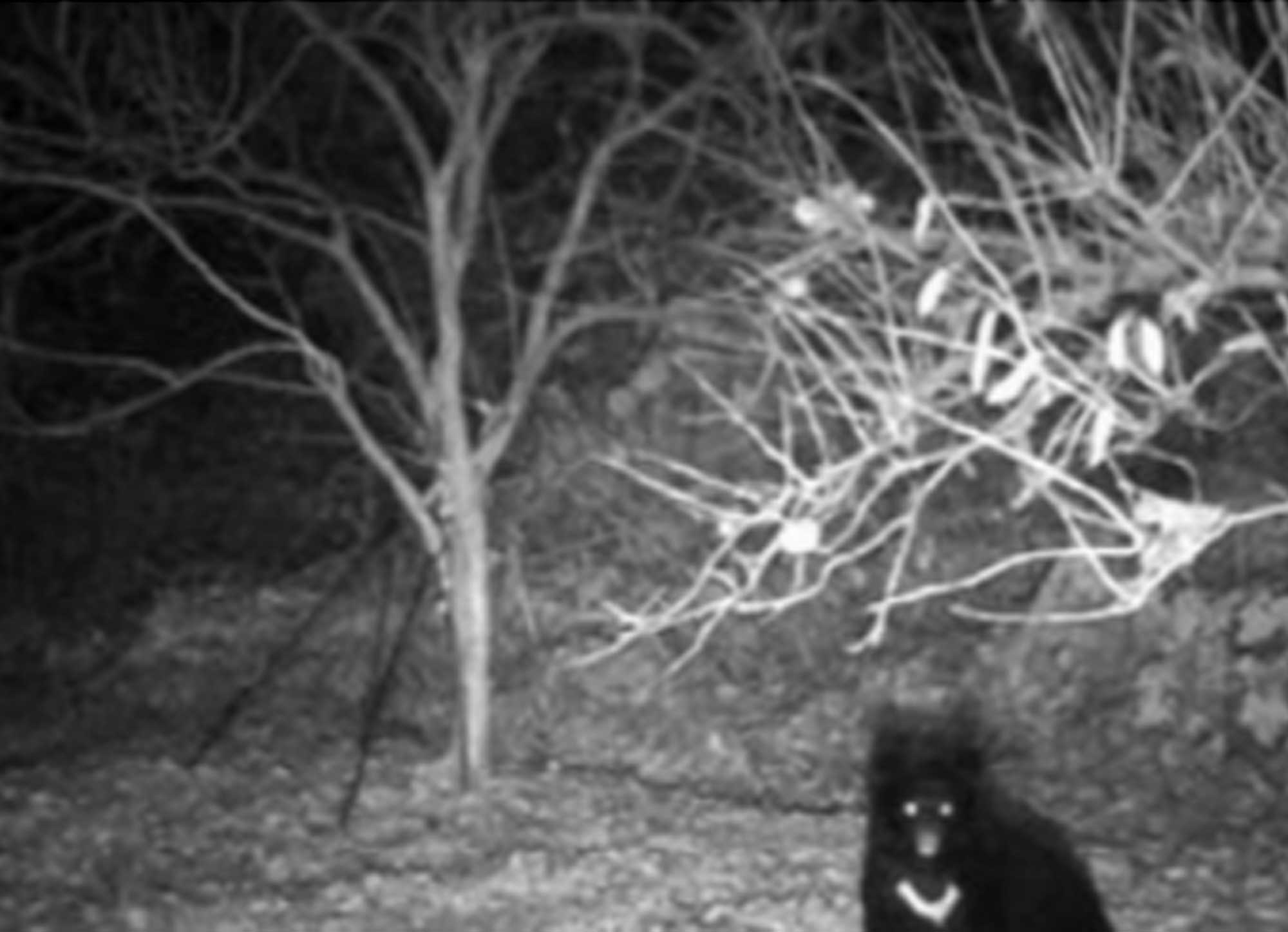 Some of the videos taken by the trail camera
*These results were obtained through a demonstration project commissioned by the Aizu Regional Promotion Bureau of Fukushima Prefecture.

"As a future aspiration, I would like to improve the accuracy of AI and develop a system that can also detect wild boars. I would also like to respond to a request from the Aizu Regional Promotion Bureau of Fukushima Prefecture to conduct a survey to identify individual black bears, and work on a system that can track bears by installing several trail cameras over a larger area. These activities are just one research topic for ARC-IoT, but I am certain its (basic) mechanisms have the potential to be applied to a wide variety of social challenges. For example, by installing the relevant sensors, we will be able to detect illegal dumping, landslides, river flooding, and so on. The IoT devices we are researching and developing are the very things that are needed to realize such solutions." A future connected by AI and IoT devices. How will our lives change in the future? We cannot take our eyes off the research being conducted by Professor SAITO and the rest of ARC-IoT, can we?

Research Centers, A Clusters, and B Clusters

The two Research Center-level clusters are as follows:

2. Aizu Research Cluster for Robotics
(ARC－Robot)
The ARC-Robot cluster, which is currently an A Cluster, also functions as a research center since the ARC-Robot's research efforts as the national and prefectural robotics development centers were highly evaluated.

The three A Clusters are as follows:

1. Aizu Research Cluster for Biomedical Engineering
(ARC－BME)
The ARC-BME cluster conducts research and development in a wide range of areas related to health, medicine, and nursing care that integrates the fields of medicine and engineering.

2. Aizu Research Cluster for Cloud
(ARC－Cloud)
This cluster conducts research and development to propose solutions to various security issues in a variety of systems such as sensor nets, robots, and energy management systems.

3. Aizu Research Cluster for Internet of Things
(ARC-IoT)
This cluster conducts research and development of AI and IoT devices that are compact and energy efficient while integrating hardware and software.

The six B Clusters are as follows:

3. Smart Design
This cluster conducts research and development aimed at transforming the knowledge creation process into "intelligence" through integrating the description, acquisition, and updating of intelligence related to "design".

6. Automated AI System Design
This cluster conducts research aimed at analyzing and solving difficult tasks in machine learning and deep learning, and automating a series of processes such as the design, development, operation, and management of AI systems.

Each cluster conducts diverse R&D at a stage that corresponds to its type, whether it is a Research Center, A Cluster, or B Cluster.