Since its opening, the University of Aizu has attracted outstanding researchers from around the world. It was in this context that the idea of holding a "programming contest" at the University of Aizu, which was already taking place overseas at the time, was born. Around the time of the 10th anniversary of the opening of the university, this idea was brought to fruition by Fukushima Prefecture and many other stakeholders.

Then, on November 22 and 23, 2003, the "National High School PC Competition" aka "PC Koshien" was held for the first time at the University of Aizu. From the University of Aizu, Professor MAEDA Takao and Senior Associate Professor KUROKAWA Hirokuni were involved in the overall operation as project team members, and were in charge of everything from entry to judging. The first Grand Prix in the Programming Division went to Matsuyama Technical High School in Ehime Prefecture, and from within the prefecture, Koriyama Kita Technical High School won third place in the CG and Contents Division.
In 2005, three years after the inaugural event, we spoke with Professor YOSHIOKA Rentaro, who has been participating in the event since its third edition, about the "History of PC Koshien.

Regarding his motivation for participating in the PC Koshien, Professor YOSHIOKA says, "I was originally in charge of open lectures at the university and was initially asked to help run the programming section of the competition. I think I was invited in part because I was anticipating that I would be able to improve the quality of the competitions and manage the competitions on campus with the help of the students who were helping me with the open lectures, and in part because I was anticipating that the competitions would be online," said Professor YOSHIOKA.
At that time, Fukushima Prefecture was making efforts to improve the Internet environment, including efforts to install personal computers in all schools in the prefecture. However, in terms of actual operation, there was a huge difference from the current situation, and the use of PCs in high schools and the Internet connection environment were far from sufficient. He also researched the actual conditions of high schools nationwide. "The reason why we were able to say that we could do it was because the University of Aizu knew more about the actual conditions of online competitions than any other university, and we were confident that we could do it because of our expertise," said Professor YOSHIOKA. Professor YOSHIOKA said.

At that time, Professor YOSHIOKA started building the competition system for the PC Koshien from scratch under such circumstances. "In the first few years, we had a lot of hardships, such as having students who were capable of making an impact help us build the competition system and having faculty and students work together to write the competition title. Looking back, I am certain that the trial and error involved in these activities helped to improve the skills of the students and the university as a whole." The know-how of the open lectures, which had been ahead of others since that time, was the very foundation of the subsequent PC Koshien. 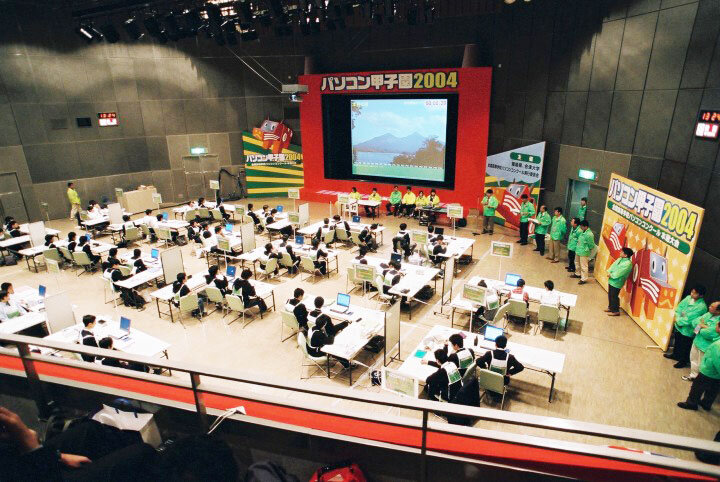 About 20 years ago, when the PC Koshien began, competitive programming itself using online systems as we know it today was still in its infancy in Japan, and awareness of programming itself was so weak that it was not at all competitive in world competitions. At that time, the programming education technology in Eastern European countries was high, and they were overwhelmingly strong.
Professor YOSHIOKA recounts the situation at that time. Under such circumstances, the JOI (Japan Information Olympiad) resumed participation in the IOI (International Olympiad for Information Technology, held since 1989) in 2006, and began working to win top prizes in order to raise Japan's position in the world in the field of information technology. The University of Aizu has been calling on high schools and technical colleges throughout Japan to participate in the PC Koshien since its inception in 2003, and has been working to improve the information processing skills of high school students through the preliminary and final competitions. For the past 20 years, the PPC Koshien has played a role in increasing the number of participants in Japan's ICT field and raising the level of human resource skills in the field.

It was about 10 years ago that he became even more aware of this perspective of increasing the number of participants. The University of Aizu's PC Koshien has a philosophy of how to expand the base of participants. As we continued the competition based on this philosophy, the level of the contest continued to rise year by year in proportion to the increase in the number of participating schools, and the management side had no choice but to raise the level of competition. However, if the difficulty level of the PC Koshien contest were to rise too high, it would be difficult for new teams to participate. We had to find a way to balance the two.
Since then, the company has been making trial-and-error efforts to attract more participants from all over the country. The iPhone from Apple Inc. was the spark that started the nationwide spread of smartphones, so we opened a new "Mobile Division" at the time of the 9th PC Koshien (2011)," says Professor YOSHIOKA.
As the times have continued to change and efforts have been made to increase the number of participants, high schools across Japan have recently begun to make "information" a required subject, creating an environment that stimulates interest in computers and other subjects.

Professor YOSHIOKA said, "From now on, rather than educating engineers, I would like to create a competition section to help people who are educated about information science and computers. I would like to create new competitions that encourage people to think about themes such as 'how the power of computers can be utilized in society' and 'what kind of society where people and computers can coexist in harmony,' and to nurture people to become engineers. 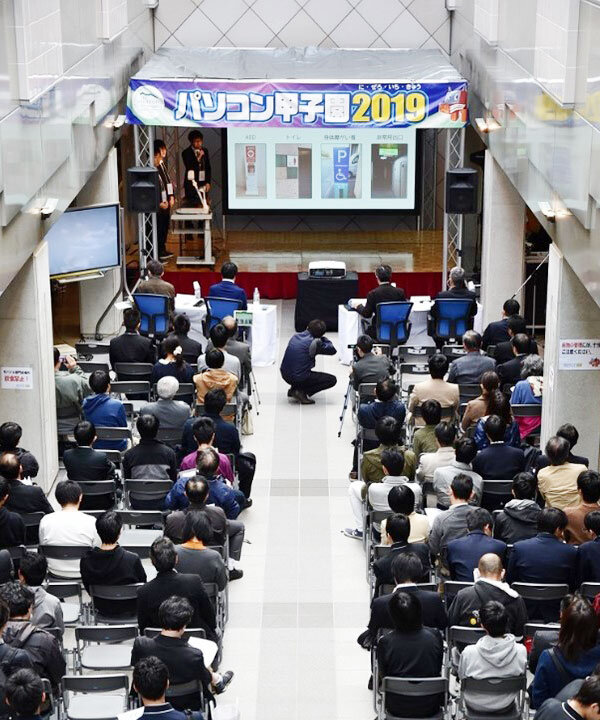 Responsible for information fostering projects in the region as well as in the country.

In my courses for high school students, I explain programming as 'the language that makes computers work. In other words, I like to tell high school students that programmers are computer teachers. Computer science and engineering is a discipline that systematizes how to develop computers. Students who learn programming at the University of Aizu graduate with the skills to properly train computers. But the important thing here is that you have to think about what you want to convey before programming," says Professor YOSHIOKA. The ability to "think about what you want to convey," or "find a problem," is not only emphasized as a necessity in daily social life, but is also positioned as a very important field within computer science and engineering. Before programming, what is necessary is to cultivate what is called "algorithmic thinking," which is the ability to think and express one's daily activities in a flowchart-like manner, and we always want to teach this kind of computer thinking as a top priority," said Professor KUROKAWA. In other words, the PC Koshien is, in a sense, a human resource development program for active high school students on a nationwide scale and, by extension, a project to raise the level of information technology professionals in Japan. I think it is not an exaggeration to say that the fact that the University of Aizu, a public university in a rural area, has continued this project for 20 years is extraordinary considering its size.

Looking back at the many competitions that have taken place since the first contest in 2003, now in its 20th year, one can see the impact that PC Koshien has had on the field of information in Japan. Although we are a university specializing in computer science and engineering, we have been able to accomplish so much not only because of the contest, but also because we have worked so hard, through trial and error, to achieve our philosophy of "expanding the base of human resources who will support Japan's information society. I believe that this has been made possible by the strong collaborative relationship between the professors and students of the University of Aizu and the local governments of Fukushima Prefecture and Aizu Wakamatsu City, as well as the University of Aizu, which supports them.
One of the results, I think, is that many of the high school students who have experienced the PC Koshien have, as if by necessity, applied for admission to the University of Aizu and taken entrance examinations. We, too, must be encouraged by this and set our sights on the challenges ahead, looking ahead to the next 20 years. We would like to provide high school students, who will lead the next generation, with opportunities to take on challenges by creating a new contest that asks what kind of human resources will be needed in the coming era," said Professor YOSHIOKA, "We will not forget the feelings we had when we founded this contest.

The University of Aizu will continue to nurture and lead many young people and contribute to the development of Japan's information society through the operation of the PC Koshien and computer science and engineering. 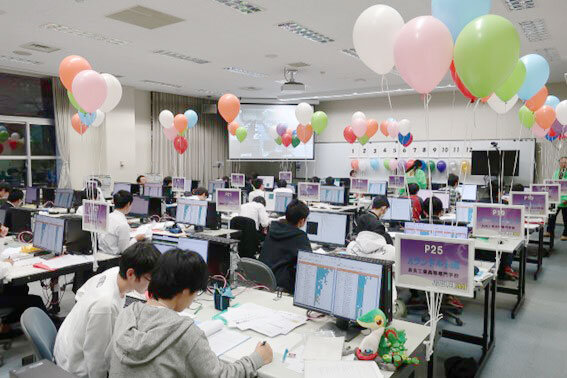