A venture company from the University of Aizu

> UoA Stories > A venture company from the University of Aizu

In the summer of 2021, amidst the COVID-19 pandemic, the Tokyo 2020 Olympic Games were held in Japan for the first time in 57 years. The baseball and softball competitions were held in Fukushima City, Fukushima Prefecture. Many Fukushima residents cheered for the athletes from Japan and abroad. However, there were no real spectators in the stadiums, and all that could be seen on the screens of TVs, smartphones, and tablets viewers watching games from their home were the athletes' dynamic movements.
The effects of the pandemic were not limited to the Olympics. As well, the daily lives of the general public were heavily affected by the requests to show self-restraint, such as by including limiting outings and keeping activities to small groups. "With the UoA prioritizing online classes, I found myself spending more and more time at home," says Ms. HASHIMOTO Shihomi, the President and CEO of Branchism, Inc.

"Now that I was living alone, my days and nights were reversed, my meals were irregular, and I had no discipline. I know that this could not be good for me mentally. 'I knew that I could not let things go on like this. In any case, I needed to start doing something,' I thought," says Hashimoto. The first thought Hashimoto had was to meet people in real life.
"To meet people, you have to coordinate things for it, and you have to prepare yourself. I strongly felt that meeting people is important for maintaining one's humanity and sociability. That is what made me want to start this service," says Hashimoto. 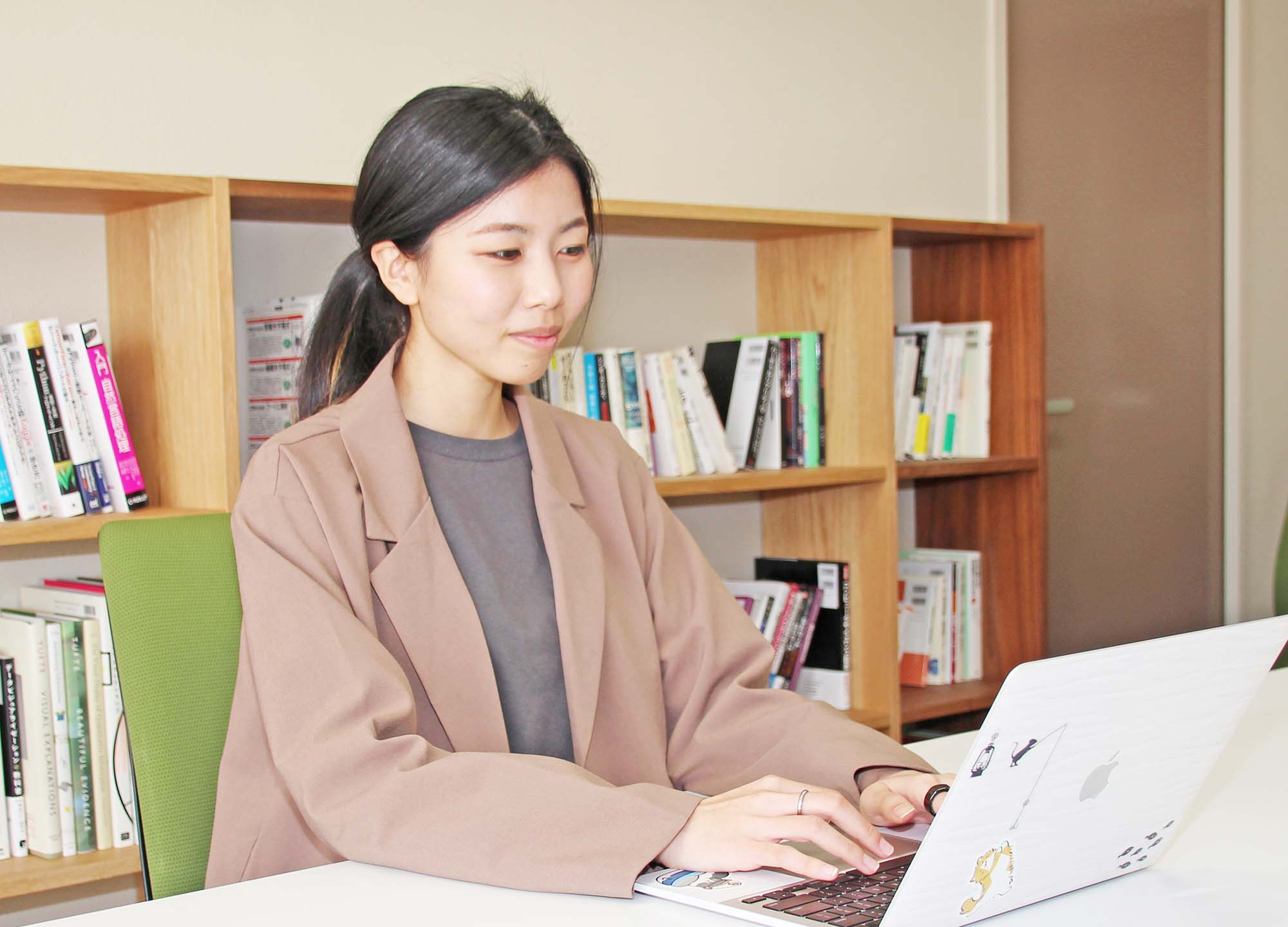 Hashimoto then created a prototype app that focused only on "meeting people" and introduced her app to friends and acquaintances. The response was better than expected, with some 60 people responding in a single week, achieving a usage rate of 25%. This gave her confidence that the app met people's needs and could solve their problems. However, in order to actually operate this service, she realized that it requires her to go beyond her friendship to solve personnel, operational, system, etc. matters. To that end, she consulted with a number of acquaintances including some contacts at an IT company in Sendai, who pushed her to try commercializing the service. This was the moment Hashimoto was shown a road map to starting a business.

The idea sparked for Hashimoto in October 2021. After getting a good response with her prototype app, she decided in November to start a business. In December, she established a company with five staff members. The company seems to be made of Hashimoto's affable classmates and juniors from the UoA.
"My absolute need to create a company outweighed the risks, and I took the staff members along with me out of sheer momentum," says Hashimoto.
"I was one of them," shyly laughs Mr. SUKEGAWA, a 4th year student who enjoys Hashimoto's trust. "I was involved in a variety of projects at the UoA and also actively participated in training, study abroad and other programs. The Silicon Valley internship was an especially beneficial experience," says Sukegawa.
The door to a new challenge for Sukegawa, whose desire to take the next step grew the more he learned, was opened to him by an unknown word "entrepreneurship" that Hashimoto suggested to him.
"This real-world experience that is entrepreneurship has been an unexpected opportunity to put my previous experiences to the test," says Sukegawa.
The driving force behind the start-up was the exquisite teamwork between the two university students, with Sukegawa providing substantive support for Hashimoto's vision. 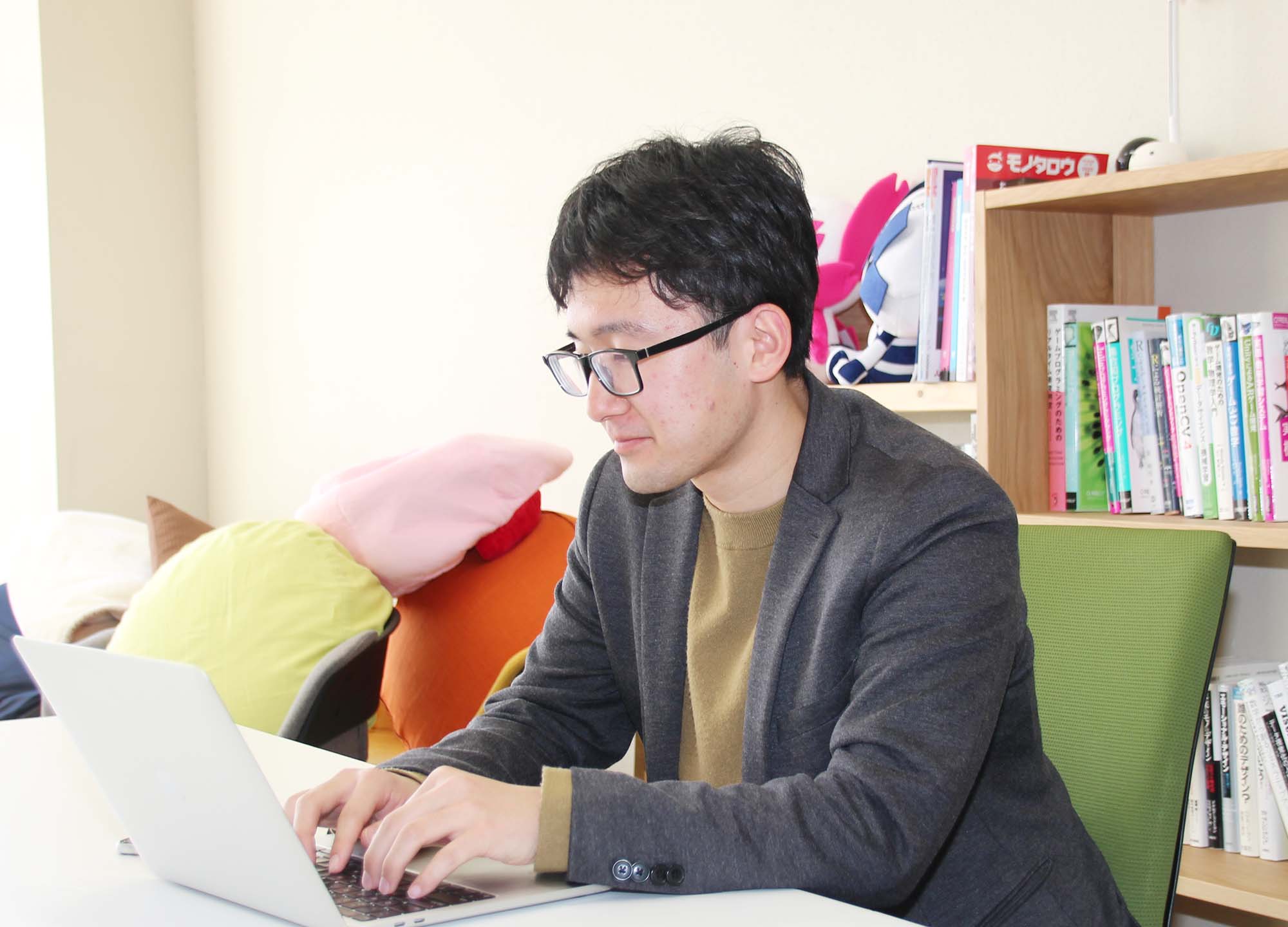 "The company name 'Branchism', a combination of the words 'branch' and 'ism,' expresses our desire to develop services in many different directions, just like branches," says Hashimoto. The goal of Hashimoto and her team is to make the world where young people can find their freedom and feel it happy to have moments they are free. "We want to create a service that can solve the mental challenges experienced by young people. Rather than just lending a hand, we want to support young people as fellow young people as our target users. That's the image we are going for," says Hashimoto.

"In order to realize my goal of starting a business, I came up with an event-based matching service for students called Splannt. We are developing an application that will help create opportunities for students to go out with peace of mind in today's restrictive environment," says Hashimoto.
The business that will become a pillar of Branchism's foundation has begun to take shape.
"The name "Splantt" is a combination of the letter S (which stands for student and school, intended to convey that the service is for young people) and plantt, a portmanteau of the words plant (a reference to the "branch" in the company name), plan, and net (as in network). We are currently gathering needs through trials ahead of a full-scale launch in April," says Hashimoto.

A demonstrator to verify demand for the matching service

What exactly is the event-based matching service Splannt that Hashimoto and her team are working on?
"It is entirely different from typical dating services. What we have in mind is event-based matching. Enrolling at a university is entering a new community, but today's university students are mainly taking online classes and not participating in circle activities or events, so they lose the opportunity to make friends in the first place. They have to start by figuring out how to find their own place in the world. To do this, we hear users about "what kind of people they would like to meet," such as those with whom they have a good conversation, or who have hobbies in common, etc., and then offer suggestions to users according to their objectives of "'what they would like to do. We call this event-based matching," says Hashimoto.
"In addition, we would also like to cooperate with shops in town to provide a place where mutually approved students can meet each other in real life in town. We have heard some local residents say, 'I don't see students in town.' We believe that Splannt can provide an opportunity for a town and its young people to connect, and that it is a service that will help revitalize towns after the pandemic. Currently, we are using existing platforms on social networking sites to collect feedback on things like what sort of service people would like to join. I want to turn this feedback data, and utilizing it in the development of our app," says Hashimoto.
According to feedbacks received during the demonstrator, the overall result was that there is a large number of people seeking to meet other people, and Hashimoto and her team believe this shows that the app is highly demanded.

In the midst of the pandemic, the UoA has begun to offer online and real classes in parallel. It has also requested their students to keep a log of where they go and what they do, and to do it with the minimum number of people.
"By logging users behaviors, our matching service is able to respond to the need of students to find new connections without putting restrictions on meeting people. The results of our demonstrator illustrate the service can reach out students and young people," says Hashimoto.
The important mission which is essential for the release of an app is the demonstrator. "Mr. Sukegawa has been working on as it is the key to our success," says Hashimoto.
She added that the demonstrator before the release of the app in April also served to promote the matching service before its release. It will likely be effective in increasing the number of users after the release. 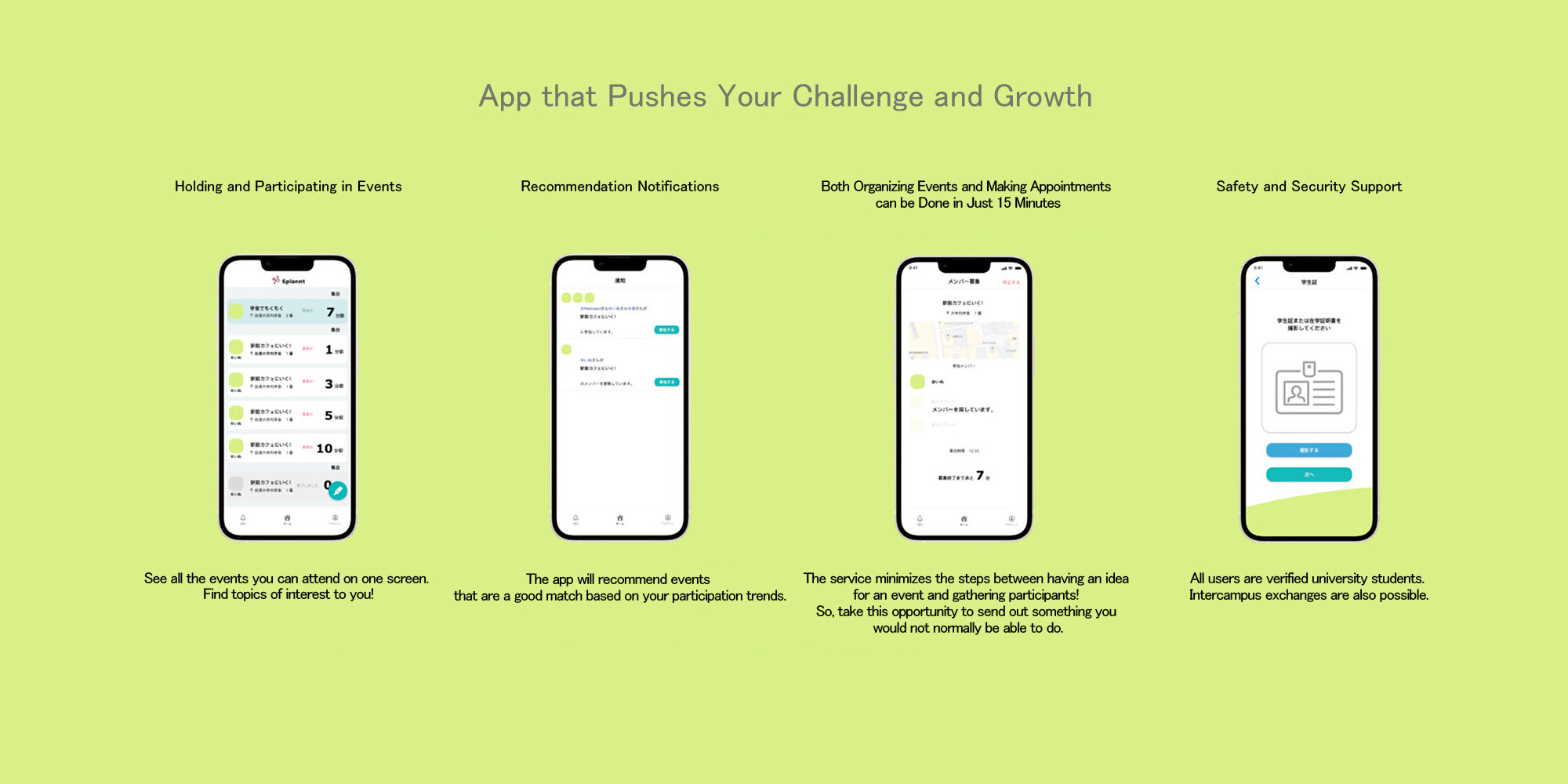 The challenge here is to raise funds. Another important aspect of getting the business off the ground is how to generate sales by providing an "event-participation matching" service as a place for students to meet each other.
"We are now working on the business model with guidance from various people in Sendai and Tokyo, including IT firms and university professors. One idea we had was charging companies for using official accounts that let them to interact with students. Small and medium-sized companies want to engage with university students, but, these companies cannot approach students unless they already know a few of them. They also do not have a place to hear from students. Students, meanwhile, say they want to interact with business people to gain experience and learn about the industries that out there outside of job-hunting settings. Our company will build a platform that not only connects young people with each other and with stores in town, but also allows them to easily connect with companies in an unprecedented social media-like way. The second idea for generating revenue is to create a database of the real and diverse preferences of the participating youth and students, including current trends and interests, that can be used for corporate marketing and other purposes," says Hashimoto.

While the company's registered address is inside the UoA Industry-University Innovation Center (UBIC), the fact that its business is app development means that its members can work from anywhere. On February 22, Branchism, Inc. was presented with a certification as a venture company originating from the UoA at a ceremony held on campus.
"While 29 firms have been certified by the UoA, only five of them, including us, were established by UoA students," says Hashimoto.
"Ever since I was a child, I liked meeting people, but I was not good at conveying my thoughts or putting them into a coherent sentence. I wished there was a method to deliver my thoughts directly," says Hashimoto.
It was then that Hashimoto happened to learn about the field of bio-signals, and intuited that she might be able to create something that could communicate externally using things like brain waves and electrocardiograms. To pursue that idea, Hashimoto entered the UoA, which has a Bioinformation Engineering Laboratory that uses IT to analyze data related to people.
"I had wanted to become a researcher who can create something that would allow people who feel limited to exercise their own strength. I never dreamed that I would start my own business (laughs)," says Hashimoto.

The UoA has developed an academic culture that respects and fully supports what students want to do. This is true not only in research, but also in entrepreneurship. UoA students have fertile ground to make what their desires a reality.
"I recommend the university for students who have something that they want to try, even if they have no knowledge of the subject. I hope that when you enter the university, you will use our application Splannt to find and connect with new friends," says Hashimoto. 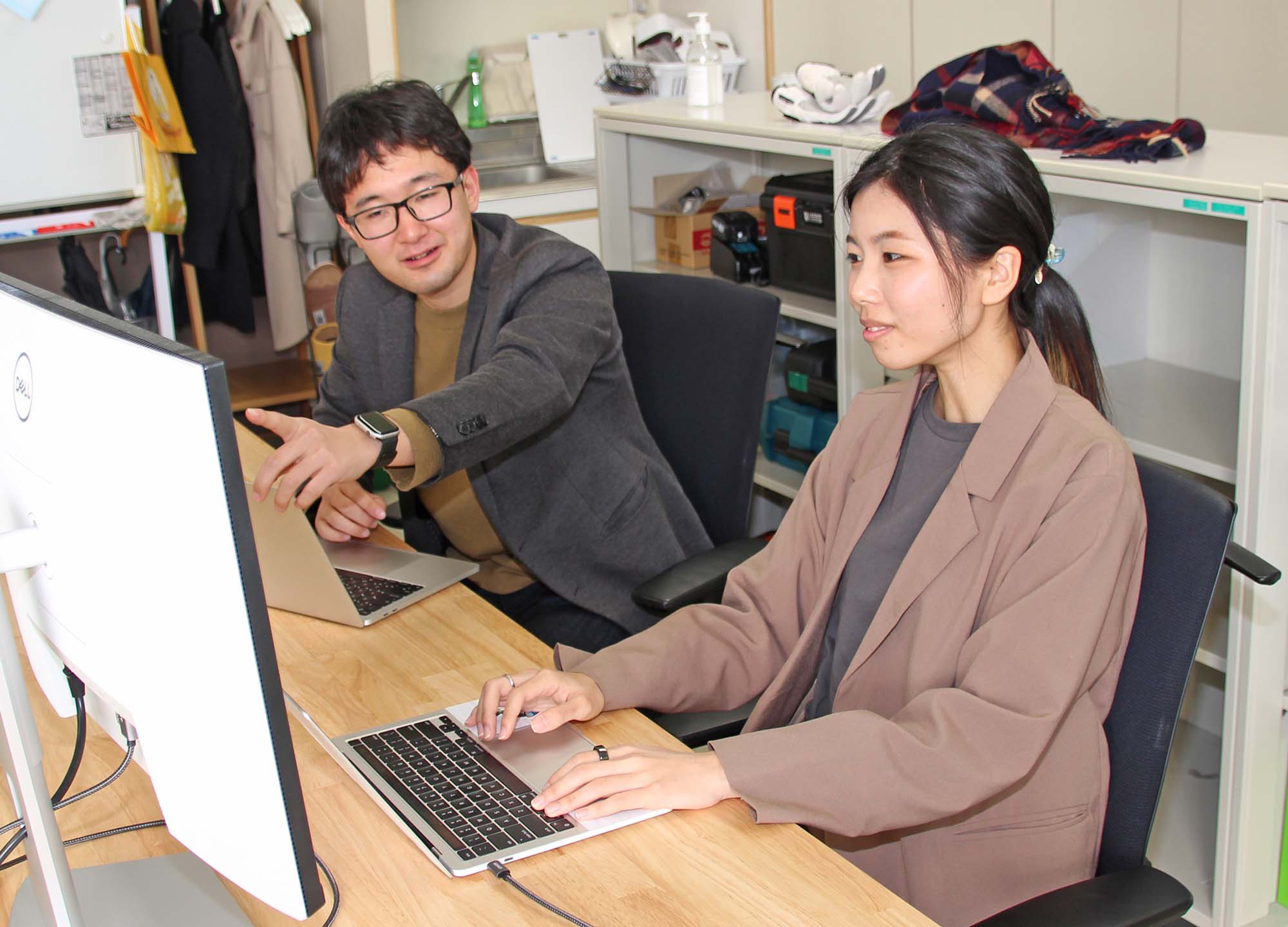 First-year master's student at the University of Aizu. she started Branchism Inc. based on her own experience. she has commercialized her desire to "realize a society in which young people can live their lives in their own way.

Fourth-year student at the University of Aizu. As one of the founding members of Branchism Inc., she is mainly responsible for the demonstration experiments that are important for the realization of the business concept.