ICPC, an abbreviation for International Collegiate Programming Contest, is the largest and most prestigious intercollegiate programming competition in the world. The contest was first held in 1970 at Texas A&M (Agricultural and Mechanical) University in the United States. In 1977, the first finals were held in conjunction with the Association for Computing Machinery (ACM). This contest served as the archetype for the current elimination-style contest. Founded in the United States in 1947, ACM is the world's largest computer science society. When IBM became a sponsor of the ICPC in 1997, the number of participants jumped to 560 universities and 840 teams. By 2007 ten years later, the event had become a global phenomenon, with the number of universities and teams reaching 1,821 and 6,700 respectively, increases of more than threefold and eightfold each.

"The University of Aizu first competed in the ICPC in 1998, when the Asian Regionals were first held in Japan," says Senior Associate Professor Yutaka Watanobe, who coaches and organizes the ICPC teams at the University of Aizu. A graduate of the University of Aizu himself, Watanobe first competed in the ICPC Asian Regional Games in 2002, when he entered graduate school, and again in 2003. Since then, he has guided the university's competitors as a coach.
"I was originally recommended to participate in the ICPC by my faculty advisor at the time, but it was through competing that I came to understand the significance of the event. This was a very big event for me."

The University of Aizu has participated in the Asian Regionals for 23 consecutive years since the first event in Japan in 1998. This record is shared by only three other universities in Japan: Kyoto University, the Tokyo Institute of Technology, and Waseda University. It is extremely rare for a small, regional public university to have made consecutive appearances.
"In order to compete in consecutive contests and continue to produce results, we need to gather excellent students and train them into capable competitors. Each team is made up of three students. Faculty coaches have to build their team, register them for the competition, and get them ready to compete. In other words, unless there is a faculty member who can serve as a coach over many years, it is difficult for a team to even compete. It is only when the team members and a coach come together that a team can compete. 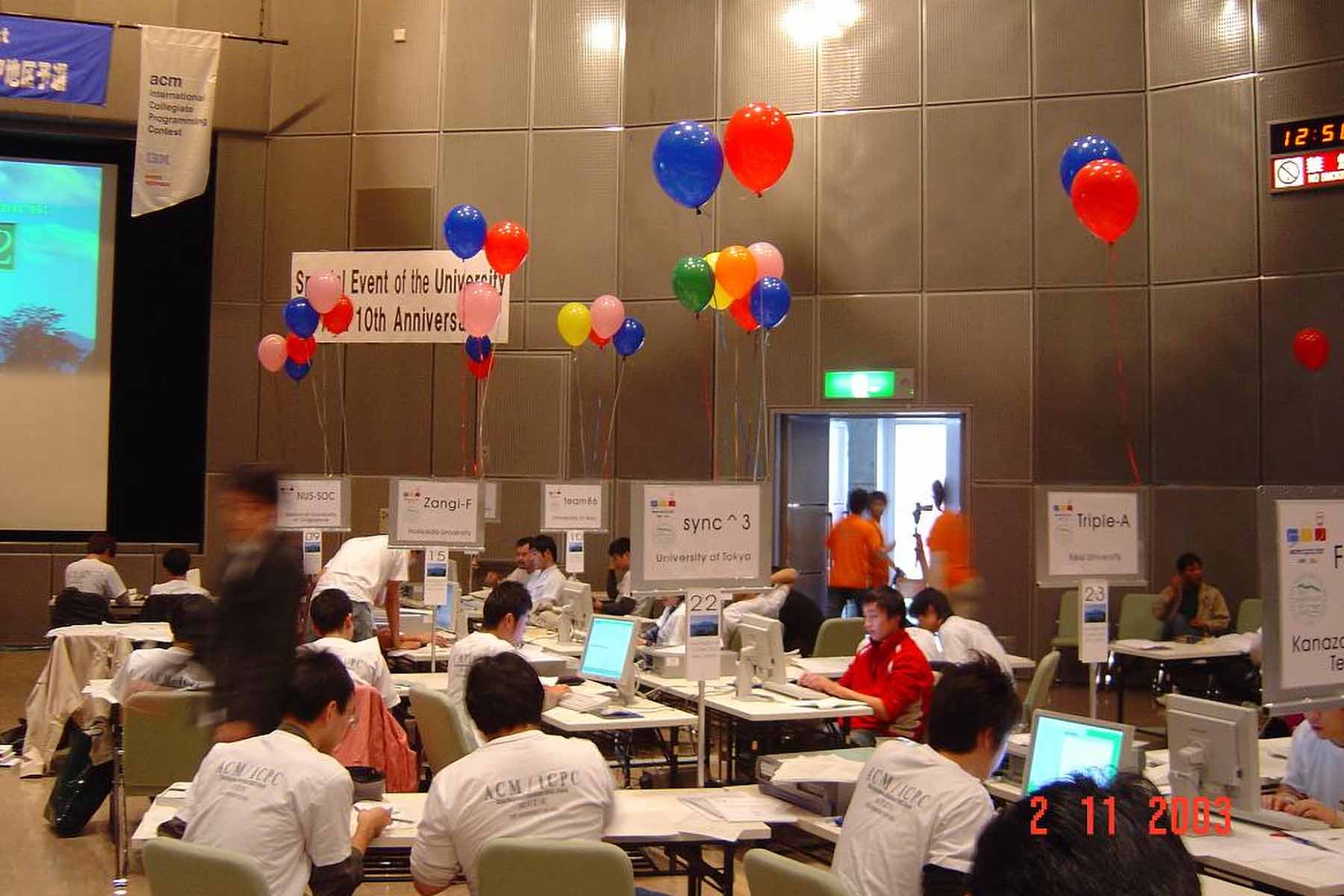 The Asian Regional Competition in 2003.

The Road to the ICPC World Finals

In April 2009, seven years after Watanobe's first appearance, the University of Aizu, having won the Asian Regional Competition, made its long-awaited first appearance at the World Finals held in Stockholm, Sweden. The University of Aizu team "Watch. c" was comprised of Yuki Hirano (a 3nd-year undergraduate student at the time), Takashi Tayama (a 4th-year undergraduate at the time), Nobuyuki Wachi (also a 4th-year undergraduate), and their coach Senior Associate Professor Watanobe. They fought well against the 99 other strong teams, which had each won their fierce regional competitions around the world. The team eventually placed 49th in their first outing, putting them amongst the top 50 teams in the world.

Since then, the University of Aizu's teams have continued to perform remarkably well, competing in the World Finals for two consecutive years in 2016 and 2017. A UoA team placed 27th at the 2020 World Championships, the University of Aizu's best showing to date, showing the world what it is capable of. Akira Nakamura, a second-year master's student at the time, was the driving force behind this achievement. In this way, the UoA's outstanding students have been active on the world stage. "I hope we can eventually earn a medal. Four gold, silver, and bronze medals each are awarded to the top teams, so our goal is to finish in the top 12, ideally the top 10," says Watanobe on looking to even greater heights in the future.

Looking back over the two decades since his first time competing in the ICPC, Prof. Watanobe says, "Having been involved in creating the questions for PC Koshien, the computing competition organized by the University of Aizu, I can say that ICPC questions are incomparably more difficult than they were 20 years ago. When I was competing, I could prepare for the ICPC by acquiring a bit of knowledge of computer science topics like algorithms, but that is no longer the case. I expect the problems will become even more difficult than they are now as time goes on." The number of people studying information science and programming is expected to continue to increase, so the number of ICPC competitors will likely continue to grow. Given this environment surrounding the ICPC, the University of Aizu's ability to continue to compete in the competition will depend not only on its ability to attract outstanding students, but its ability to create students with outstanding qualities. 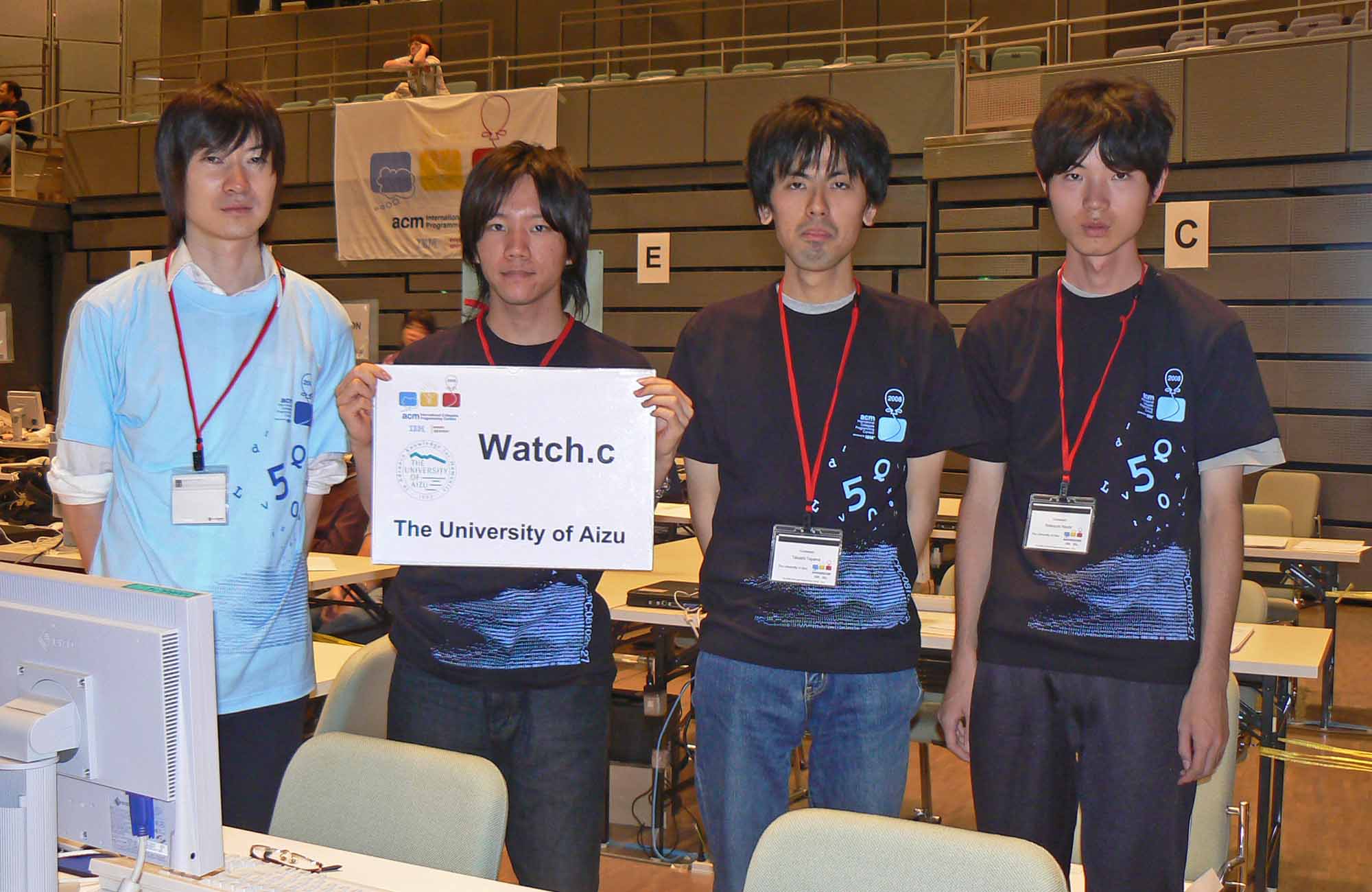 The members of the UoA team Watch. c, which finished 49th in the World Finals

"Because it is world-level programming competition in which university teams tackle the same problems in the same environment under strict rules, I have always believed that the ICPC is the best measure of a university's true ability. Programming is the essence of computer science," says. Watanobe. In the ICPC programming contest, competitors write programs that use math and algorithms to derive the correct answer to the problems . Watanobe continues, "Compared to other contests, the ICPC is a contest of pure mental acuity. It is truly a showcase of the quality of the education of the competing universities."
"The ICPC is not a competition where anyone can get to the top if they work hard. More than anything else, it tests student's instincts. As I mentioned earlier, coaches also play an important role in educating and nurturing students, but at the same time, the reality of the situation is that they will not be able to win unless they can gather students who have the right talents."

Every year, Watanobe enthusiastically scouts newcomers to the University of Aizu by telling new students about the UoA's performances at the ICPC's Asian Regionals and the World Finals and finding the talented individuals among the students who show interest. He then develops the qualities and turns them into competitors.
He emphasizes that the ICPC is a big stage where the true value of the education of universities around the world is tested, as well as just how hard it is to compete in the World Finals. "The University of Tokyo stands at the pinnacle of Japanese education. It is unrivaled by any other domestic university, and is one of the top universities in the world, so the difference in ability is obvious. In addition to the University of Tokyo, other prestigious universities in Japan such as Kyoto University, Tokyo Institute of Technology, and Tohoku University, are all represented in the competition, so it's no exaggeration to say the University of Aizu's ability to win against such strong opponents and compete in the World Finals four times is proof that we are a university capable of representing Japan," says Watanobe.
For more than 20 years, the University of Aizu has provided generous support to students and teams competing in the ICPC. "Thanks to this support, they have competed at the Asian Regionals and the World Finals, and have achieved results that put them on a par with world-class competitors. These students have gone on to work for some of the world's largest and most prestigious companies in IT and related fields, and are now active on the global stage.
While celebrating the achievements of our graduates, the University of Aizu will do its utmost to back up future challengers who take a new step forward in pursuit of the world stage," emphatically concludes Watanobe. 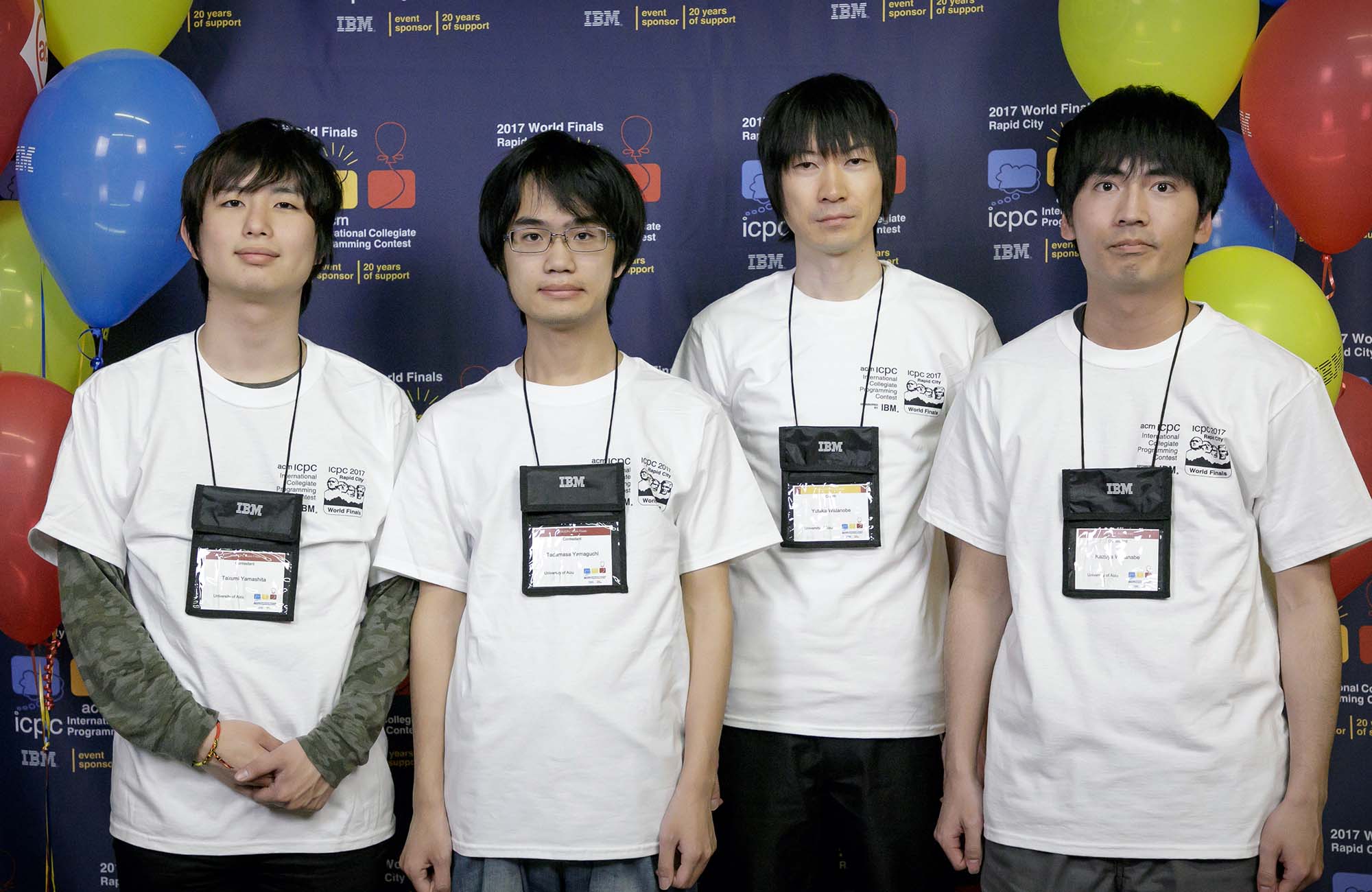 Students at the University of Aizu continue to take on challenges with generous support.

Senior Associate Professor, Computer Science and Engineering. He is himself a graduate of the University of Aizu.