ACM-ICPC in Asian Round

> Information > ACM-ICPC in Asian Round

ACM-ICPC in Asian Round 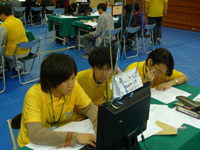 ".Watch", a team which tried to make it into World Finals of ACM-ICPC ended up being eliminated in Asian qualifiers.
The team of Mr. Takashi Tayama in the 1st year of Master's Program, Mr. Tomoya Sakai and Mr. Yuki Hirano, both in the 4th year of Undergraduate School, competed in the preliminary rounds held in Kaohsiung, Taiwan, on December 3, and held in Tokyo, Japan on December 10. Despite their good results by universities ranking 10th in Kaohsiung and 7th in Tokyo among top teams in Japan and the world, they failed to get a ticket to the 2nd appearance in the Finals from our university.
Coach Yutaka Watanobe, Assistant Professor of the Database Systems Laboratory, praised the team for their achievements by saying, "Unfortunately we couldn't get to the Finals, but I am satisfied with our results ranking 4th in Tokyo among Japanese universities, after University of Tokyo, Kyoto University and Tokyo Institute of Technology".
ACM-ICPC, known as a competition to choose the best programming team in the world among universities, accepts only 100 teams into the Finals out of nearly 22,000 contestants. ".Watch" which practiced hard to represent Asia didn't succeed in their goal. However, a new team including Mr. Sakai who will advance to the Graduate School will take over this challenge. 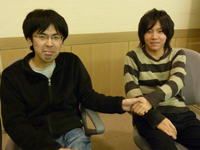 It was a last opportunity for Mr. Tayama and Mr. Hirano to strive together for the Finals. They teamed up for 4 years and became the first team from our university to appear in the Finals. Mr. Hirano has already landed a job, and Mr. Tayama has decided his retirement from competitive programming to become a coach for young students. They, who actually have led the whole programming team, looked back on their challenge by saying, "It was fun". The best thing they remember is to have advanced to the Finals in Stockholm, Sweden, in April of 2009. Its grand opening ceremony was very impressive to them and it still remains in their memories. The Asian regional preliminary in Aizu was also an unforgettable memory. They caught up from behind in the last 20 seconds and qualified for the Finals. They met practiced once a week over the past 4 years. This continuous effort actually helped Mr. Hirano get a job after graduation. Mr. Tayama also believes that his experience can be useful in many ways in the future.
We are expecting new students to join our programming team in this coming spring. Mr. Hirano left a message to encourage future students by saying, "It's important to make steady efforts during your study at the University for your years". 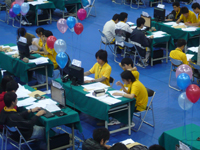 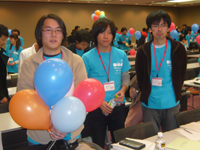 Scene from the preliminary round in Kaohsiung (left), after competition in Tokyo (right)