Mr. Yuki Ikegaki, a third-year student of the Department of Computer Hardware at the School of Computer Science and Engineering, has finished his 3-week research (from November 22 to December 16) at Rose-Hulman Institute of Technology (hereafter referred to as RHIT), USA on UoA's International Short-Term Study Program for Academic Year 2007.
Here is a report on his research and daily life in RHIT.

A report on RHIT, USA

Before I went to RHIT, I had stayed at Professor Orr's parents' home for three days, because he made a business trip to universities in Indiana. Fortunately, I could have my first experience of Thanksgiving Day in the U.S. At that party, I had a Thanksgiving dinner made by his mother. I ate turkey with cranberry sauce for the first time. I had wonderful experiences in these three days: watching the matches of the American football, going for a walk around the city, and so on. 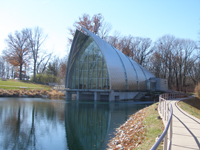 On the fourth day, I went to RHIT by Professor Orr's car. I stayed at dormitory with other two freshman students. At RHIT, there are 10 periods a day. Every class has three or four hours a week and students have almost the same class schedule everyday. There is no lunch time, so students have lunch in their free time. And also, the break time between classes is only five minutes, so they have to move to the next class room in a hurry.

Next, I am going to talk about my impression on some lectures which I took.
At "Operating Systems" class, students learn the basis of the C language with only two days (50min x 4 periods). I heard that they had already learned other computer languages, but I was really surprised at their learning speed. At "Japanese Language and Culture" class, they learn mainly Japanese in this term. It was amazing to me that every student can speak Japanese fluently, even they have learned Japanese for one and quarter year. I heard that they learned Japanese from Japanese Anime and J-Pop. Some students were quite familiar with Japanese Anime. They even knew much about some Anime which most Japanese people don't know. I also took "Digital Systems", "Electric Device Modeling" and some other classes which are related to computer science/engineering, "Principles of Economics", and another social study's class. In every class, every student asks and discusses actively when they have questions, and they don't ask any questions to their professor after the class. I think it is opposite to most Japanese students' cases.

Next, I am going to talk about my daily life.
The first class began at 8:05. Most of my friends in my dormitory woke up at 8:00, and then, they went to their class room. After their class, they took a short break, had a dinner, and did their homework. It seemed that even freshman students took 2-4 hours everyday for their homework and preparations. Since I could finish most of my homework during my classes, I took 2 hours for my homework. After that, I did my preparations or answered questions from my friends. After we finished our works, we watched movies or played video games. Most students enjoyed themselves a lot deep into the night on Tuesday and Friday because they didn't have classes on Wednesday morning, Saturday, and Sunday. And they woke up afternoon on the next day. On weekends, we played video games in the daytime, did homework in the evening, and watched movies at night. 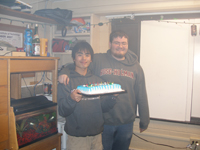 My lively life passed in no time. I will keep in touch with my friends in U.S. by Email, and I would like to see them again someday. I am going to use my valuable experiences to advantage in my daily life and my future, and discuss with my friends : American culture, customs and students' life; Japanese original culture and customs which I re-found after I came back to Japan.