Report of study at Taylor University

Being as the first exchange student from Aizu University to Taylor University, I had such a precious time and experience during those three weeks. One of the reasons why I wanted to learn there was that Taylor University has variety of classes and majors and great programs in business and art major. Another reason that drew my attention was that this school loves students with the faith of Christianity. 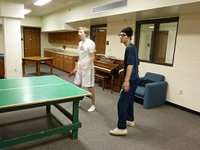 When I arrived on campus, the first impression I had was the warmness of professors and students. It seemed that their bonding was more than just classmates but real friendships who care one another. Students at each dorm were living together as if they were families. Whatever they did whether eating, shopping, or playing, they hung out together in each dorm. One of the events that shaped this strong union in each dorm was the sport events that they compete against each dorm throughout the year. It was the basketball season during my visit.
As far as the academic side of my experience there is concerned, I took computer, computer system, business and Bible class. Each class was relatively small as small as five students and sixty at most. In almost every class, students brought their own laptops and took notes on them. I could see that each student was motivated and often times expressed their own opinions in class. Sometimes, students insisted their opinions to professors which I rarely see in Japanese Universities. In business class, students were usually assigned to read tens of pages from the textbook and shared their insights and feedbacks during the next class. What I learned the most from this class was how to express your opinions and defend your points in a debate like setting. I would like to use these experiences to advantage.


Report of study at Rose-Hulman Institute of Technology

I joined this short-term study program in Rose-Hulman Institute of Technology to see classes and students in United States and to experience life in a place where people speak English.

I took classes related to Computer Science, Mathematics, Humanities and Social Sciences in this program. I found many differences between classes at RHIT and ones at UoA such as class schedule, the number of students in a class and attitude of students and professors. When a professor asked question to students, some students always answered. In addition, students ask a professor when they can't understand. 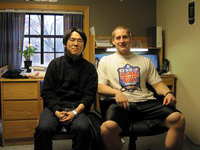 During the short-term program I stayed at a dormitory with a sophomore student. It was my first time to live with another person sharing a room. It was difficult to communicate with my roommate or other friends in English because sometimes I couldn't understand what they said, and also I couldn't say what I wanted to tell them. However, they helped me many times, so that I spent good time. On the second weekend, one professor welcomed me to his home as a home stay. He took me for sightseeing in Indianapolis which is the capital of Indiana State. Through life in United States, I experienced the difference of food, culture and life.
As the result of this short-term study program, I noticed that my English skill is not enough to communicate. Thanks to the help from many people, I could finish the short-term study program and have great experiences. There are many foreign students in University of Aizu. I would like to help them when they have some trouble in Aizu.

I stayed at the Rose-Hulman Institute of Technology (RHIT) in Indiana in March. All things such as home stay and dinner with a professor are precious experiences for me because I had been to a foreign country for the first time.

I could take some small and high level classes, and I found many different points between classes taught in USA and in Japan. Professors and students are like friends, so almost all students actively asked question and said their own opinions. 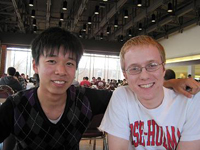 I usually enjoyed sports and conversation with my friends, and we went shopping and the theater on days off. I asked my friends to say words again and again in conversation because it was difficult for me to listen, but I could enjoy because they responded to me kindly.
Through the three weeks, I don't think that my English was improved significantly, but I feel more strongly than before that I want to speak English well. In addition, I learned what is more important than English. I'll study hard in the University of Aizu as Rose-Hulman students desperately study. I've really had a good time.