Mr. Fumio Nakajima, a third-year student of the University of Aizu, and Mr. Junichi Fujinuma, a first-year student of the University of Aizu, has finished their two-week program (from March 12, 2008 - March 29) at Rose-Hulman Institute of Technology, U.S.A. (state of Indiana) on UoA's International Short-Term Study Program for Academic Year 2007.
Here are the reports on their study and daily life at RHIT.


A report from Mr. Fumio Nakajima 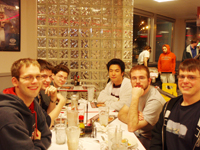 I had two purposes for this Short-Term Study Program. One purpose was to confirm my English skills I have studied in Japan. I wanted to know how much English I could use in the United States. The English spoken by my roommate and his friends was much faster than studying materials which can be bought in Japan, so I had to ask them to say over and over for my understanding. Similarly I had to say to them over and over for their understanding. Therefore, I asked my friends I got along with at RHIT about English, such as pronunciation of L and R, what differences there are between L and R. It was a very good experience for me to study English because what I learned from my friends was different from books or lectures in my college.

Another purpose was to see students studying in the same field but in a deferent country. I have heard that RHIT had provided good lectures and students had put a lot of efforts into study, and it was exactly correct. In class, students use their own laptop, and sometimes there are students who are seeing an unrelated website. However, when they have something they don't understand in the lecture, they immediately ask their professor a question and solve their problem during the class. I think class was not difficult for them because they had prepared enough. When they return to their dorm, they do a lot of homework. Since when they are assigned their homework, there is always not enough time by its deadline, they always have to finish their homework in a hurry. While they are busy, they also play cards and video games sometimes. On the other hand, even in this enjoyable time, they can stop playing by saying "I'll go back to my room after next three games because I have to do my homework." I admired how good they can control themselves and shift from OFF to ON...
Even in the only two-week program, I learned a lot of things. Especially, students' attitude and behavior should be followed. I want to use those things I could learn in US to advantage in my life and my future.


A report from Mr. Junichi Fujinuma

During this program, I took "Introduction to Software Development," "Operating System," "Data Structures and Algorithms" and "Oversea Chinese" for my audition classes. All of the classes are small, 30 students at most. Students ask Professors questions very actively, and the Professors also reply to their questions very carefully. The paces of the classes are fast and the amounts of the assignments are large so that it was really hard to keep up with the classes, in particular, upper grade classes. Actually, every class was interesting for me, especially, "Introduction to Software Development" and "Oversea Chinese" were my best. 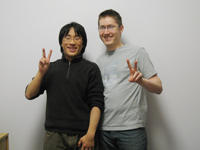 Let me talk about the student's life.
After going back to their dormitory, they start studying on their own timings. Students in RHIT are very good at adjusting their thinking. It was just amazing for me. I really love the American style food so I didn't have any problems in eating during the staying. One problem that I had is...shopping. Shop hours of the stores in RHIT are not so long and kinds of the merchandise are not good enough. By the way, I love the place called "Worx." It is like a cafeteria and silent place. Actually, dormitory was too noisy for me...I like to be alone in a silent place.

I've been to United States in this program after a long separation, and I re-realized that I like United States. I didn't have big trouble in communication, but I think that if I had much knowledge about computer science, it would be more fantastic experience for me. I want to go oversea again after I deepen my technical knowledge.