The team members' comments:
Kazuki Omomo (2nd-year Masters), team leader:
"This is the final year for me to compete in ICPC as a UoA student. Our younger members did a very good job at the preliminaries. I will give my best at the Asian Regional Contest, making sure not to slow down the other members, in order to make it to the world finals."

Tadamasa Yamaguchi (Undergraduate Junior):
"At the contest as a freshman, I was not able to perform to the best of my ability. As a sophomore, our team failed to qualify for the Asian Regional contest by a narrow margin. The third time is the charm. I am very glad we made it through this year's domestic contest to advance to the next stage. We will prepare to give it our all at the Asian contest to make sure we finally succeed at the last competition of our senior member."

Takumi Yamashita (Undergraduate Sophomore), the youngest member:
"I am glad that our team has made it to the Asian contest. My senior members are credited with this successful result. I myself am satisfied with what I did for the team. I will trust in my own potential, aiming for the world finals."

Associate Professor Yutaka Watanobe (*3), coach:
"From among a crowd of strong competitors, our team made it to the Asian contest and our university placed 5th among domestic universities. This was a marvelous result. We are going to face tough competition going forward, but I am sure our members will do their best toward the world finals."

All the team members seemed prepared for the Asian Regional contest with a common goal of making it to the world finals as this is the final year for Omomo. 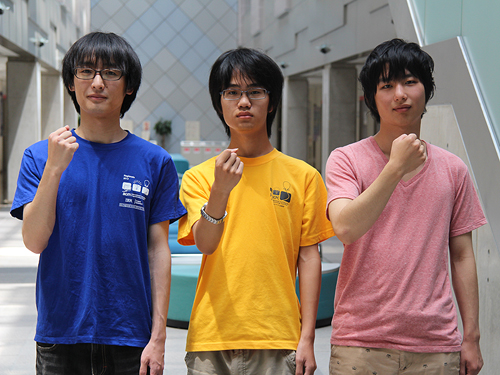 *1 ACM-ICPC International Collegiate Programming Contest: An international programming contest for university students held by the ACM (Association for Computing Machinery) since 1976, the ICPC is a contest in which teams of three students try to answer as many problems in as short a time as possible. As the only world-level programming contest for university students, the universities and teams that compete are highly respected around the world.
*2 List of the competitors, Results from the contest
*3 Introduction of Associate Professor Yutaka Watanobe, The UoA Competitive Programming Club official site