On Sunday October 19 and November 1, 2014, the ACM-ICPC Asia Regional Contests (*1) were held in Tokyo and Kuala Lumpur respectively. UoA Team AizukkYYY competed in both, earning 13th place in Tokyo (*2) and 8th in Kuala Lumpur (*3).

Naoki Terunuma (4th Year) looked back on his final contest as a UoA student, stating, "Being able to give my all at my last ICPC, leaving no regrets behind, makes me really happy. Competitive programming is a lot of fun, so I recommend everyone gives it a try."
Kazuki Omomo (Master's 1st Year) spoke of future goals, stating "This year was my third Asia regional contest. I really wanted to finally get to the world finals, but the fact that whether we can go or not remains unclear is disappoint. Although I was able to give it my all at the Kuala Lumpur contest, we were no match for the other schools. Next year I want to aim at beating the other schools."
Nariyoshi Chida (4th Year) had advice for underclassmen. "Whether we didn't practice enough for the Kuala Lumpur contest, or didn't the right way, I felt the need to review how we practice. I want to tell my underclassmen to remember that if they don't practice enough, they won't be able to compete at their full potential."

Team coach Yutaka Watanobe (*4) spoke of his future aspirations, stating, "We fought well, even against much stronger opponents. While we had more than a chance to go to the World Finals, the powerhouse universities had trained even harder. I would like to concentrate on strategies, etc. in the future to make sure students can perform at their full potential without any regrets. I would also like to engage in activities to promote the educational benefit and fun of programming contests.

The UoA Competitive Programming Club continues to aim at achieving even better results next year and beyond. 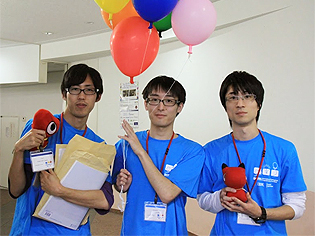 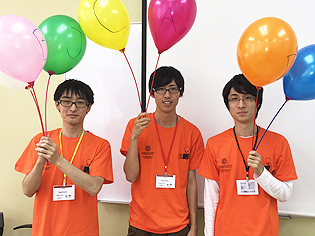 The team members look back on the contest in front of the Research Quadrangles Computer Exercise Rooms.

*1 ACM-ICPC International Collegiate Programming Contest:
An international programming contest for university students held by the ACM (Association for Computing Machinery) since 1976, the ICPC is a contest in which teams of three students try to answer as many problems in as short a time as possible. As the only world-level programming contest for university students, the universities and teams that compete are highly respected around the world.